“HBO is Knocked Out of the Boxing Game.” “HBO Hangs up the Gloves.” “HBO Throws in the Towel.” And from the keyboard of HBOWatch’s fearless editor: “HBO Gives Boxing a Whopper of a TKO.” If one were to google “HBO Boxing”, the aforementioned puns and variations thereof, would show up in many searches. Nonetheless, no matter what prose is used, the message is clear: Live broadcasted boxing no longer has a home at Home Box Office.  There are a myriad of factors leading to this watershed moment in sports telecasting, ranging from budget constraints, AT&T influence and the continuing rise of stellar fights on rival platforms. Regarding the latter dynamic, I could expend a plethora of words, contrasting the nuances of the level of boxing coverage on various networks. However, this piece is an unconventional ode to HBO’s near half-century coverage of combatant sports.

Down goes Frazier! Down goes Frazier! Down goes Frazier! These three words, repeated three times by the late Howard Cosell, was a double trifecta of astonishment. Having successfully defended his heavyweight titles from top-ranked opponents, including the man who re-revolutionized boxing, Muhammad Ali, Joe Frazier was down on the canvas within seconds against George Foreman. HBO debuted this brief but shocking fight to viewers on January 22, 1973, just a mere 81 days after its weather impaired debut.  Yet, despite the outcome, Frazier went into the bout a 3-1 favorite. Just like its eventual original programming, this HBO airing was anything but trite and predictable. Using his greater size to advantage, Foreman bombarded Frazier with uppercuts, knocking him down six times in two rounds, as the crowd went wild in Kingston’s National Stadium. Foreman’s last punch, a perfect right uppercut, lifted Frazier’s stocky frame into the air for an instant before he hit the canvas yet again. The champion struggled to his feet, but at that point, 1:35 into the second round, the referee Arthur Mercante called an end to the bout, declaring Foreman the winner and new champ by technical knock-out (TKO). Being that this was a championship bought, the fight was billed under HBO’s World Championship Boxing (WCB) banner.

The next wave of WCB matches is also of boxing canon. October 29, 1974 was the date of The Rumble in the Jungle (pictured), a bout that could only be initially viewed through HBO’s pay-per-view closed-circuit television.  The Rumble in the Jungle garnered over 3 million PPV buys and treated viewers to a brutal match between an aging legend and a mountainous young fighter on the 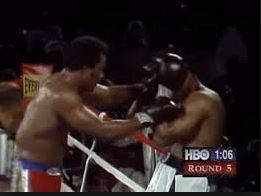 rise. Ali was renowned for his speed and agility, and although these abilities were still intact, his physical prowess was only a fragment of what people witnessed in Ali’s heyday. Therefore Ali employed uncharacteristic straightforward attacks against the powerful and sturdy Foreman. HBO cameras also captured one of the most celebrated yet dangerous strategies in boxing: The rope-a-dope. HBOers were treated to a tactic that seemed to be ring suicide: Ali allowed Foreman to intermittently and at times in long duration, rain heavy combinations on his head and body. Or at least this is as it appeared, for many of the punches were absorbed by Ali’s Everlast gloves and well-conditioned torso. Although high definition was decades away, HBO’s cable infrastructure allowed for crisp viewing in households. The Rumble in the Jungle ended prematurely, but not due to the person thought to be hitting the canvas. In the eighth round Foreman suffered his first loss, being knocked out due to the accumulation of Ali’s combinations, and being heavily fatigued from throwing an abundance of missed and absorbed punches.

1975 was a landmark year for HBO. The network was finally making a profit, and along with C-SPAN, were the first network to venture into satellite communications. The Westar-1 satellite was launched the previous year, and on September 30, 1975, this technological marvel transmitted the third and final battle between Muhammad Ali and Joe Frazier: The Thrilla in Manilla. The battleground for this fight was in the Philippines, although it was autumn, the heat was sweltering. In a fightascloseasthis, Ali managed to close both of his opponent’s eyes but sustained so much punishment to the body that he pleaded for his corner to cut his gloves off, wanting to concede the fight. But before the referee could notice Ali’s surrender, Joe Frazier’s corner threw in the towel. This HBO event remains one of the most analyzed and revered matches in boxing history.

After the Ali, Foreman, and Frazier era, the 1980s brought forth exciting coverage opportunities for HBO in several weight classes.   At heavyweight, Larry Holmes defeated Gerry Cooney, in a fight that was socially and politically charged; much to the chagrin of both fighters. The fight ended with the more skilled Holmes being the victor. In an episode of HBO’s Legendary Nights, both men revealed that they remain close friends, and were appalled by society picking sides, not based on merit or skill, but of skin color. Mike Tyson, the troubled young slugger from Brooklyn, NY would be a staple on HBO, until his 1991 woes, related to rape charges. Tyson’s most memorable HBO outing was his first defeat against James “Buster” Douglas. In 1989, in Tokyo, Japan, Jim Lampley was the first announcer to say the words “Mike Tyson has been knocked out”. Side note: Lampley, will be the only member of HBO’s boxing analysts that will remain with the network to cover other sports programming.

Although Mike Tyson would go on to have successful and intense non-title bouts, the best heavyweight clashes on HBO was the Bowe-Holyfield trilogy. The first and third fight(s) was what spectators would expect: Two prize fighters unleashing heavy artillery and defensive tactics. Bowe was the man with his hand raised in these odd numbered matches. The second bout is memorable not only for the Holyfield victory but for one of the oddest interruptions caught on television. James Jarret Miller, a parachutist and paraglider, and a man whom would continue his aerial antics in later years circled Caesar’s Palace several times and landed on the top rope of the ring in the seventh round of Bowe-Holyfield II.  As the crowd and security detail delivered more damage to Miller than the two billed prize fighters dished on each other, HBO commentators (who were just as bewildered as viewers), commentated on the bizarre event and the rounds in the fight thus far. After a 21-minute delay, the fight resumed and HBO commenters believed that the delay was a significant factor for Bowe receiving his only defeat. The incident seemingly shifted the momentum in Holyfield’s favor. HBO PPV buyers were treated to a great fight and once-in-a-lifetime anomaly in sports.

In lower weight classes, the caliber of fights did not diminish. As the heavyweight division lessened in talent, HBO shined in lightweight, welterweight, middleweight, and light heavyweight boxing up until the mid-2000s. Boxing Hall of Famers Oscar De La Hoya and Roy Jones appeared 42 times on HBO and remained in business with HBO as a promoter and analyst respectively.  Other note-worthy encounters included: The Battle of the Champions, when Aaron Pryor beat Alexis Argüello in their first fight; Carnival of Champions, in which Wilfredo Gómez beat Lupe Pintor, and Thomas Hearns beat Wilfred Benítez; the Marvin Hagler-Thomas Hearns fight, billed as The War; and Thunder Meets Lightning, in which Julio César Chávez beat a leading on the scorecards Meldrick Taylor, with two seconds remaining in the twelfth round.

When megastar Floyd Mayweather defeated Oscar De La Hoya, Mayweather became the highest paid boxer in boxing history. Mayweather is known for having an opinion as deep as his pockets and pitted in an interview with HBO boxing analyst Larry Merchant after a 2012 fight, the gloves came off metaphorically. Merchant and Mayweather engaged in an argument that nearly became physical and Mayweather took his entire promotions team to HBO’s primordial rival Showtime.  Certainly, more exciting matches transpired after Mayweather’s departure, most recently with Canelo vs. GGG II, which lived up to the hype. However, between the years of 2012-2017, more fighters did a grand exodus to the other premium cable network and the basic cable powerhouse ESPN. Floyd Mayweather conducted one last business transaction with HBO. Mayweather vs. Pacquiao was a hail-Mary that generated revenue but diminished HBO’s brand. The Mayweather vs. Pacquiao fight was so anticipated that HBO and Showtime shared coverage.  Although the fight generated record-breaking PPV buys, the lackluster event was not indicative of HBO Boxing caliber matches.  The $99 PPV price tag was much higher than previous PPV events, and not nearly as exciting as events that could be viewed on advertisement laden networks and basic cable. Case in point, the first two outings in the superb Gatti vs. Ward trilogy, were non-pay-per-view events; even though these fights were so superb that I would not have been upset for paying additional for all three fights.

This is the end of an important era, but also a beginning of a new era of opportunity for HBO to invest in the highest quality original programming.  HBO’s final live boxing telecast will be a middleweight even between Danny Jacobs and Serhiy Derevianchenko on October 27. Although at Madison Square Garden, the setting will be in the Hulu Theater, which seats approximately 6,000 people. This will not be one of the more lucrative fights for the once network of champions, but here’s to hoping that this middleweight bout will be a worthy addition to a four-decade-plus legacy of boxing excellence. We showed the following clip before when the milestone was reached but it proves a great way to sum up 45 years of HBO Boxing.

Feel free to share your HBO Boxing experience below.