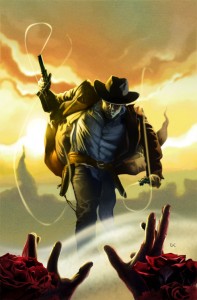 At a release event for the new movie, ‘Tower Heist’, producer Brian Grazer revealed that Stephen King’s Dark Tower, a project plagued by budged issues and long awaited by fans all over the world, will be produced on HBO.

“We’re going to do [‘The Dark Tower’] with HBO,” Grazer told us. “We’ll do the TV with HBO, and we’ll do the movie with… to be determined. We’ll do it right.  We’re going to do that movie. We’ve lost $45 million out of the budget, he said.  When people say no to you enough, then you have to lose money, which we’ve done without harming the scope of the film.”

Hopefully HBO’s notoriously big budgets and amazing production value will work well for the fan favorite Dark Tower series.  Grazer told MTV that he believes Javier Bardem will likely still star as Roland Deschain, and that he and Ron Howard (who will direct) have cut the budget of the film by $45 million as they seek a new studio.

Yet another amazing fantasy title to go alongside HBO’s already formidable lineup!   True Blood and Game of Thrones fans know that HBO does not let fans down when it comes to translating text to screen.  We can’t wait to see what they do with the series!  Check out the MTV interview with the producer for a bit more: