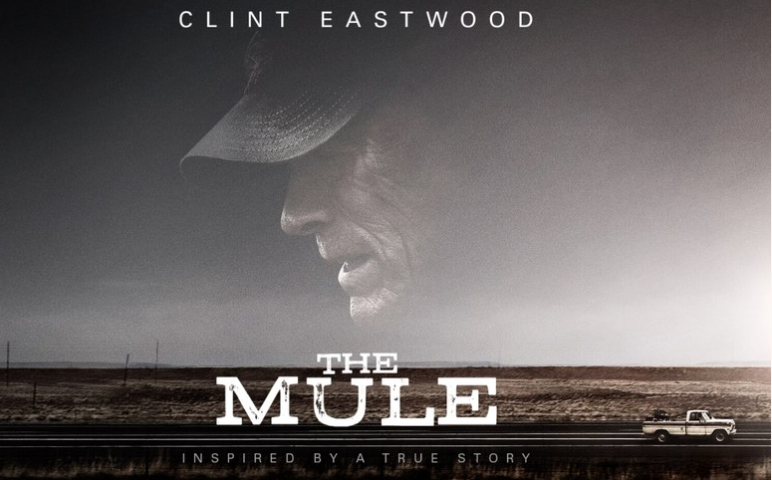 Ah, Clint Eastwood, ya got to love ‘im. I do and wish I had the time to take in his latest movie called THE MULE from 2018. He just keeps going at 89 years of life. He stars and directs this one as he has done with most of the films he has done in his later years. Here he gives us the story of Earl Stone. The character is not quite as old as Clint but has a surprising story to tell, one based on fact.

It seems Earl Stone is a drug mule. He brings cocaine across the Mexican border and who is going to suspect and pull over an old geezer poking along in an old pickup truck? The screenplay, by Nick Schenk (who also penned Gran Torino for Eastwood), is based on The New York Times article “The Sinaloa Cartel’s 90-Year-Old Drug Mule” by Sam Dolnick, which recounts the story of Leo Sharp, a World War II veteran who became a drug courier for the Sinaloa Cartel in his 80s.

It seems Earl Stone is facing financial ruin and is estranged from his ex-wife Mary (Dianne Wiest) and daughter Iris (Allison Eastwood, daughter of the director), for always putting work before family. He’s still on friendly terms with his granddaughter Ginny (Taissa Farmiga). His mind is preoccupied with his desperation, so much so that he falls into becoming a drug mule. Facing little suspicion due to his age, race, spotless criminal history, and strict adherence to driving laws, Earl is soon trusted with huge amounts of drugs and paid large amounts of cash. Until that one day that DEA Agent Colin Bates (Bradley Cooper) is on his tail. I’m guessing it all to mush then. Laurence Fishburne is seen as a DEA agent and Andy Garcia is a biggie in the drug cartel.

If you are loving Clint, who might not have many more movies in him at his age, then check out THE MULE which debuts on Saturday, August 17 @ 8:00pm.