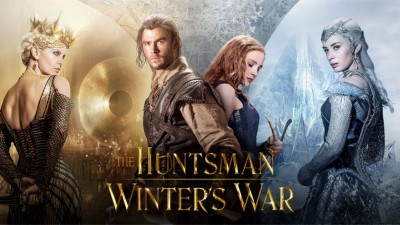 HBOWatch Editors were not able to line-up a writer to review THE HUNTSMAN: WINTER’S WAR, which is the sequel to 2012’s Snow With and the Huntsman. We draw your attention to this film as it debuts on HBO on SATURDAY, FEBRUARY 04 at 8:00pm. Actually, this 2016 pic starts as a flashback to reveal that Queen Ravenna, Charlize Theron’s role, had an equally evil sister Queen Freya, played by Emily Blunt. After that is established we jump to after Ravenna’s demise seen in the first movie.

Now our Huntsman, Chris Hemsworth, needs to deal with Freya as she out to obtain the Magic Mirror for herself and chases and fights ensue. Also appearing eventually is Sara (Jessica Chastain) the lost love of the Huntsman, thought killed by Freya. Also afoot are dwarves as this is a Snow White story don’t forget. What will it take to take down Queen Freya? Not only is she a formidable match for the merry band, but there is no telling what powers could be released by the Magic Mirror that everyone wants to possess. We saw what power it held for Ravenna. Will the Huntsman win the day? Well, what do you think? Of course, he will but how? Below is HBO’s quick promo:

Are you ready, because that teaser gave us next to nothing didn’t it? The movie from Universal clocks in at 2 hours & 1 minute and is rated PG-13. It will then appear across the channels as well as on HBONow/Go. One of the biggest takeaways I got from looking at a few reviews was the thought of how unnecessary this movie was yet it is visually stunning, which was what they said about the first one. I’ll add that it had a strong cast going for it as well. Here is what Rotten Tomatoes said:

If you want a piece of fluff, a visually slick piece of fantasy fluff than by all means watch THE HUNTSMAN: WINTER’s WAR and let us know what you thought of it. Here is an official full trailer to close: