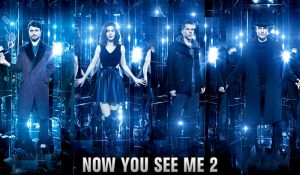 HBOWatch Editors were not able to line-up a writer to review NOW YOU SEE ME 2 with the prestidigitation laden Four Horseman but that doesn’t mean we don’t want to draw your attention to this action movie rated PG-13. It clocks in at 115-minutes and is, of course, the 2016 sequel to the original 2013 film that we reviewed here. The movie from Lionsgate debuts SATURDAY, JANUARY 14 at 8:00pm. It will then appear across the channels as well as on HBONow/Go. Below is HBO’s quick promo:

Just what is going down for this elite pack (Jesse Eisenberg, Woody Harrelson, Dave Franco and Lizzy Caplin; replacing pregnant Isla Fisher) of Las Vegas illusionists? Another caper, natch. One year after outwitting the FBI and winning the public’s adulation with their Robin Hood-style magic spectacles, The Four Horsemen resurface for a comeback performance in hopes of exposing the unethical practices of a tech magnate. The man behind their vanishing act is none other than Walter Mabry (Daniel Radcliffe), a tech prodigy who threatens the Horsemen into pulling off their most impossible heist yet. Their only hope is to perform one last unprecedented stunt to clear their names and reveal the mastermind behind it all.

That is right a bigger threat looms ahead and the team, via illusion, misdirection and a whole lot of smarm, to get to the truth. But can they outwit the mastermind who has a magical trick or two up his sleeve as well? Confused? Here is a bit of clarity via the trailer:

There you go. It is gonna be glitzy, splashy and full of sleight of hand. It has Mark Ruffalo, Michael Caine and Morgan Freeman as the smoothest bad-ass bad guy there is – Thaddeus Bradley. It seems he has his own plan for world domination in play. Can The Four Horseman dazzle him?  Will the movie dazzle you? Well, let’s just say director Jon M. Chu is going forward with NOW YOU SEE ME 3. You’ll only know if you’re diggin’ the action and the magic if you watch NOW YOU SEE ME 2. Will you? Let us know and check out other reviews or more HBO movies right here.

Below Rotten Tomatoes weighs in: