We already talked up this movie when it hit as a Same-Day Premiere on HBO Max back in September of 2021, but now the movie has made its appearance on HBO channels across the cable landscape. We draw your attention to it because, well, who knows how many new Clint Eastwood movies we are going to get? The man is 91 years old.

The screenplay for CRY MACHO, by Nick Schenk and the late N. Richard Nash, is based on Nash’s 1975 novel of the same name. It was theatrically released in the United States on September 17, 2021, by Warner Bros. Pictures with a simultaneous release on the HBO Max streaming service for 31 days. It underperformed at the box office, grossing $14.7 million against a $33 million production budget. From the movie’s official site comes this description – The film stars Eastwood as Mike Milo, a one-time rodeo star and washed-up horse breeder who, in 1979, takes a job from an ex-boss to bring the man’s young son home from Mexico. Forced to take the backroads on their way to Texas, the unlikely pair faces an unexpectedly challenging journey, during which the world-weary horseman finds unexpected connections and his own sense of redemption.

Wikipedia posted some critical comments. The movie received a polarized response. Variety‘s Owen Gleiberman praised Eastwood’s direction for keeping the story simple “in an inoffensive and good-natured way.” Glenn Kenny, writing for RogerEbert.com, gave the film three and a half stars out of four, lauding it for its cinematography and second act, where “small events transpire in beautifully shot, unhurried scenes. The simple sincerity about what’s worthwhile in life is the movie’s reason for being. Nothing more and nothing less.” From The New York Times, A. O. Scott found it to be a “hangout movie with nothing much to prove and just enough to say,” gave positive feedback to the film’s score and scenery, and wrote about Eastwood, “If the old man’s driving, my advice is to get in and enjoy the ride.” RT aggregated the results this way – 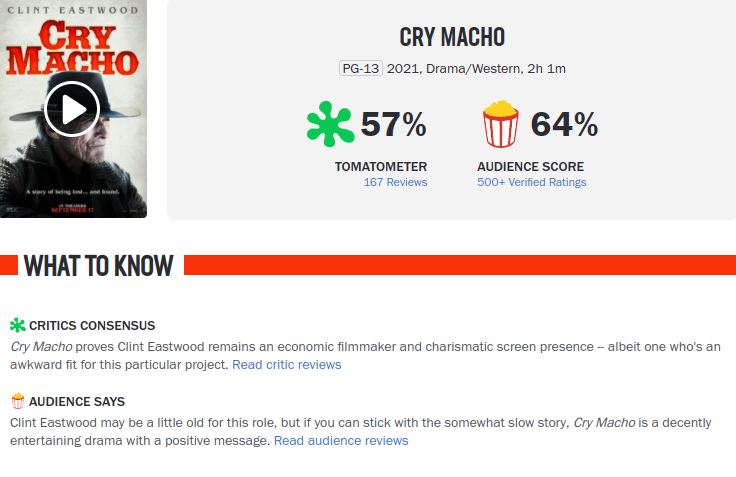