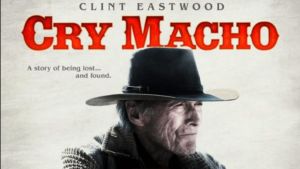 CRY MACHO. It just sounds like the title of a Clint Eastwood movie and not just one that he’d direct but one he’d also star in. Hell, it even sounds like a fit for his Man with No Name persona. You know, up there with A Fistful of Dollars and The Good, The Bad and the Ugly. By the way, those titles are available on HBO Max via the TCM Hub. I digress, this is supposed to be about his latest. Cry Macho is a Western drama directed and produced by Eastwood and is adapted by Nick Schenk; based on the 1975 novel of the same name by N. Richard Nash.  It is the latest WarnerMedia Same-Day Premiere. The movie opened in available cinemas on Friday, September 17, 2021 and was uploaded to HBO Max the same day. The only catch is the movie appears for a limited time on the ad-free option of the streaming service. It runs through October 18, 2021. You might say that there is another catch; how do I watch this flick in the safety of my own home? Answer – you’ll need to subscribe to HBO Max.  That’s right, check out the latest deals and subscribe now.

Where to Stream “Cry Macho” Online

There was once a time when HBO didn’t have a streaming service of its own. But today we have HBO Max, one of the most advanced streaming services on the market that not only gives you access to HBO’s entire catalog from the past years, but adds new movies, series, and specials of its own plus an endless stream of entertainment options from other properties in the Warner family, like TCM, TBS, TNT, Cartoon Network and the  DC Universe. The best way to watch “Cry Macho” and more online is to grab an HBOMax subscription for about fifteen bucks a month, or you can sign up for six months and get a better deal. The Same Day Premieres are not a part of the ad-supported version of the streamer.

When Does “Cry Macho” Premiere?

What is “Cry Macho” About?

Clint Eastwood plays Mike Milo, a retired rodeo star. His former boss Howard Polk (Dwight Yoakum, yes the singer & sometimes actor) hires him to travel to Mexico City and bring back Howard’s 13-year-old son, Rafo (Eduardo Minett).  He agrees and upon entering Mexico, he meets the boy’s mother, who tells him that Rafo has turned to a life of crime, participating in cockfights with a rooster named Macho. Soon after, Mike finds Rafo participating in a cockfight that is interrupted by a police raid. Milo gets him out of trouble and Rafo accepts the offer to go with Mike back to Texas and to his well-off father. Thus, lies a journey and a tale that Eastwood passed up once, but now takes on. Cue the music – “Wah, Wah, Wah – doddle, doddle dooooh – Wah Wahhhh.”