Straight Outta Compton follows the same path as most other movies about famous musicians, coming from nothing to creating something that permanently changes our culture. What makes it different, and in this case, so much more exciting is that we see the growing pains of those changes, witnessing just how much music can affect the day to day lives of those who couldn’t find an outlet for pent-up frustration at a system that didn’t (and one could say still doesn’t) care about them. Usually we can see how the music is a reflection of the artist’s inner turmoil, reflecting on themselves and how the sacrifices they made in pursuing their passions led to the destruction of their personal lives. But here, the music is never so much a reflection of themselves as it is of what they see as their day to day struggle and perceived injustices. Which is to say in no uncertain terms that the rise of the N.W.A. is comparable to a true revolution. If that was it, the movie would be something great, capturing that moment when the music and the time in which it was created were harmonized with one another.

The myth -making at play here burns brightest when we can really see the personal problems of the main characters as it reflects the era. Eazy-E starts out the movie escaping a drug deal by the skin of his teeth, Dre has his needs split between a kid and making music. This and their continual harassment by the police etc. all lead to the creation of music largely misunderstood by the white dominant culture but is absolutely enamoring to the black audience that has been craving an outlet for what they’ve had to endure. Seeing the sparks as their music creates civil unrest is electrifying; watching as they make their music for the first time together is inspiring. 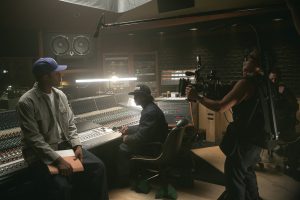 But once they leave the streets and move into their big mansions – movie starts to stumble. Once the era of N.W.A. is over it seems like the movie is too scattershot following Ice Cube, Dr. Dre, and Eazy-E as they all come to the realization that the people they put their faith in weren’t up front about their intentions. Cube’s move to Hollywood is brushed over with a brief allusion to his movie Friday, and Dre gets into music producing with Suge Knight, a man so viperous it’s completely at odds with the character of Dre in the movie. Either he’s too afraid to stand up to him or he’s complicit with just how horrific of a person he is. Meanwhile Eazy struggles with his finances up until his diagnosis with HIV. It says something that a movie can be so engaging while so much of it revolves around contract disputes. I think the only other time that’s happened is in The Social Network. The movie never falls below above average, but once the N.W.A. concerts end the movie never finds that same height.

The movie’s also too eager to gloss over some of the less glamourous portions of the characters’ lives. Dr. Dre couldn’t have been blind to the kind of person Suge Knight was, as well as the fact that he abused several women. And despite their protesting it, the lyrics to their music did have some significant effects, especially with regards to homophobia.

Straight Outta Compton shines in its righteous battle with authority, but doesn’t hold on to that energy long enough to be considered a masterpiece. Still, it’s worth seeking out if you haven’t already and is just as good a second time. Definitely consider watching.

Watch The Trailer Below!