Another YA dystopian? Really? While you might dispirit the amount of young adult dystopia currently permeating our society, the second installment of the Divergent series offers an interesting plot and heart pounding action. Check out the trailer and my review of the first film installment here.

Insurgent picks up where the last film left off, Tris (Shailene Woodley) and Four (Theo James) are on the run from the Erudite leader Jeanine (Kate Winslet) as she tries to round up and eliminate divergents.  If you are unfamiliar with the series, this post apocalyptic society is broken into five factions.  Each faction is focused around a specific idea and when youth turn 16, they must take a test to decide to which faction they belong.  Divergents belong to more than one faction, thus bucking the faction system.

While it seems like Jeanine is out for blood, there might be something more at work.  What can Tris and Four do to save their people while on the run?  But also, who are their people anymore?  Divergents are scattered.  The Dauntless faction is also scattered, either following Erudite’s lead or hiding from the law.  Four is dealing with the mental torment of helping save his abusive father, when it leads to interacting with the Factionless, those who were kicked out of their factions or failed the faction test.  A familiar face for Four emerges onto the scene and Four must choose between protecting Tris or starting a war. 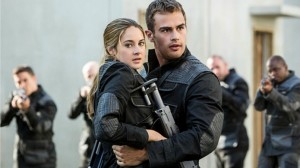 From the very beginning, the movie is high paced.  Just moments into the film, the main characters are on the run and shooting up the place.  That brisk action keeps up throughout the entire film in my opinion.  While the first part of the trilogy sets up the story, this second part not only moves the plot forward but in an action packed and interesting way.  By the end of the film, you are wondering what is next for the main characters and how will pivotal actions of characters affect the plot.

Many supporting actors reprise their roles in the film including Jai Courtney as Eric, Mekhi Phifer as Max, Ansel Elgort as Caleb, Miles Teller as Peter, and Zoe Kravitz as Christina.   New faces include Octavia Spencer, Naomi Watts, and Daniel Dae Kim. Casting did a fantastic job of placing unbelievably talented actors in great roles.

While dystopia is currently having its hay-day, it is safe to say that Divergent is not the same as the rest (coughHungerGamescough).  While the second film in the Hunger Games perpetuates the same plot line as the first film, in my opinion the second film in the Divergent series pushes forward and creates a new foe for the characters and newer challenges. I believe that Insurgent presents part of the challenges that for the Hunger Games are not offered until Mockingjay.

As a sequel, I believe Insurgent provides enough action and plot to be a successful follow-up.  The cast continues to be phenomenal and new faces provide even more talent.  Check out Insurgent when it debuts on HBO on Saturday, December 12 at 8:00pm.