I’m a huge fan of dystopian literature, especially young adult novels. Having enjoyed the books, I was thrilled to hear Divergent was being adapted.

Based in a post-apocalyptic Chicago, the society remaining has created a faction system.  When parents have children, they are raised in their parents’ faction until they turn 16 at which point they take an aptitude test to determine in which faction they truly belong.  The factions are Abnegation (the selfless), Erudite (the intelligent), Amity (the peaceful), Candor (the honest), and Dauntless (the brave).  If you cannot pick a faction or fail out of your choice, you become factionless. 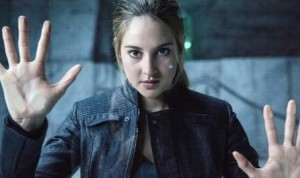 Our protagonist Beatrice (Shailene Woodley) discovers she has aptitude for multiple factions, meaning she is Divergent.  Tensions between factions are mounting and Divergent are considered a threat that needs to be eliminated.

This film is packed full of amazing actresses and actors.  Woodley (The Descendents, The Secret Life of the American Teenager) is fantastic as the main character.  Her parents are played by Tony Goldwyn (Scandal) and Ashley Judd (Double Jeopardy, Missing).  Ray Stevenson (Rome), Mekhi Phifer (ER), and Kate Winslet (Titanic) are various faction leaders. 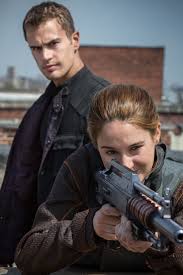 Playing Woodley’s love interest in The Fault in Our Stars, Ansel Elgort plays her brother Caleb in this film. Beatrice’s love interest Four is played by Theo James (Golden Boy, Bedlam) and he embodies the mysterious character well.

The cinematography is absolutely fantastic.  It takes Chicago, a beautiful, thriving city, and creates a broken and destroyed wasteland.  The use of color is lovely as each faction has its own color palette.  It makes it easier to distinguish which characters belong to which factions, but also facilitates awesome wardrobe choices.

As a reader, I could easily sit and nitpick what was missing from the film.  But truthfully, the film holds the story very well and is delightful to watch if you enjoy young adult dystopia.  That being said, many people are sick of that genre.  Quite a few people asked me if it was any different from The Hunger Games.  A dystopia where a young female is attempting to overthrow a government movement to control people, yes in that sense it is like The Hunger Games.  But if you boil it down to just that, you will miss the many beautiful and interesting subtleties between the two.

The sequel Insurgent is set to hit theaters in March of next year and looks like it will be as pulse pounding as its predecessor.

Check out this quiz if you’re interesting in finding out to which faction you belong! Divergent premieres on HBO Saturday, December 20th.