The very limited series, Landscapers, is inspired by the true murders of Patricia and William Wycherley. I’ll admit, growing up watching stuff like CSI and Law & Order: SVU, I always loved the ones based on real cases. This story has been ripped from the headlines, type of stuff was always really intriguing to me. Because it’s seeing human nature play out for real and human beings do bad, weird stuff sometimes. Knowing nothing about this case before diving in, I was surprised as the details started emerging from what is a complicated tragedy. But watching the talents of Olivia Coleman and David Thewlis bring the story to the screen enthralls me even more. The title draws a connection to the crime scene, but also a great quote about relationships in the show. In every relationship, one person is the gardener and one person is the garden. Ruminating on this has been an interesting frame for the first two episodes.

The first episode opens with some vital information regarding the murders, which really did occur but especially the fact that Susan Edwards and her husband, Christopher Edwards, maintain their innocence to this day. Not necessarily surprising, but as things unfold on the screen it will be easy for all of us to make our own judgments about their guilt. We open with the couple in France, Susan (Coleman) negotiating over a special poster print and Christopher (Thewlis) struggling to find work. It’s clear their situation is getting dire, though access to credit is working just fine. In an attempt to ease their situation, Chris calls his stepmother for money, who immediately rolls him. That gave me a chuckle. Cops start digging into the case, talking to the neighbors, the usual. I’m enjoying DC Lancing (Kate O’Flynn) and DC Wilkie’s (Samuel Anderson) chemistry. But especially when they were interviewing the hilarious neighbor and taking his eyewitness statements. The cinematography has some amazing moments but especially the dig sequence in the backyard. The Edwards’ love of old films is featured but also used tactfully by production, showing us two people living their own version of an old Hollywood dream. 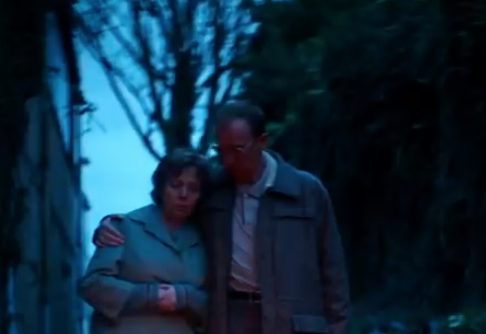 Gaining press attention in France, Chris gets in touch with the police to discuss having discussions. But things need to be delicate because Susan is delicate. Is she delicate or just delusional? And I don’t mean that to be rude, but people are capable of convincing themselves enough that they can pass lie detectors because to them it isn’t a lie. Susan probably lives in her own constructed reality but Chris is doing his best to protect her. Ultimately, they agree with their circumstances being what they are that it’s time to return to England, courtesy of the police; well done on that negotiation, Christopher. They fully intend on telling their story, but we see the hesitation. Both Coleman and Thewlis are absolutely acting their asses off and I can’t wait to see more.

When we start episode two, the couple has been separated and processed with exceptional cinematography. She agrees to talk to a lawyer (Dipo Ola), who convinces her that “no comment” is the stronger plan than telling them everything. As a lawyer, you got a good one. But the change in strategy doesn’t exactly reach Chris and having wiggle room means opportunities for the police. DC Lancing does brilliantly and immediately begins sowing doubt in Susan’s mind, and some of it isn’t even a lie but that’s how the cops get you. We reflect on the past and how the two met, circumstances of her background start to emerge. Getting locked out as an adult certainly gives the picture that these aren’t the best parents. For crying out loud, she’s not some teenager. Eventually, Susan opens up about the abuse she suffered at her father’s hands. And when detailing what happened that night, she states that when she found her mother had murdered her father, her mother admitted to knowing the abuse was happening and doing nothing to stop it. Ok, being a survivor myself and studying victimology, I’m finding her story a tad more believable. Mom had drinking issues, so it’s entirely possible she got drunk and decided to confront her husband, killing him. And then after arguing with her mother, Susan shot her in the moment. And for a moment, I was starting to feel for her. But then the bank account thing came up. Now, things are feeling a tad more premeditated. And the whole clearly memorized thing is suspect too. So far, the cinematography has laid out the Edwards’ version of events. I’m curious if we’ll see any other scenarios played out, especially if Chris was really at home or not.  The venture with Sky Studios, who also helped produce The Third Day, has been visually stunning and I’m ready for more.