Straight from HBO.com itself comes news that actress Olivia Colman has a project for HBO. You might not think you do, but you know Olivia Colman. She was Queen Anne in The Favourite, Queen Elizabeth !! In The Crown, Godmother in Fleabag, Madame Thenardier in Les Miserables, and even a voice in Thomas The Tank Engine & Friends. Now she will appear on HBO in the future with LANDSCAPERS.

Here from the site are the details:

What is it?
The four-part limited series, inspired by real events, tells the story of Susan and Christopher Edwards, a mild-mannered couple who went on to kill Susan’s parents and bury them in their back garden, a crime that remained undiscovered for over a decade. The darkly comic drama is based on extensive research, hours of interviews and 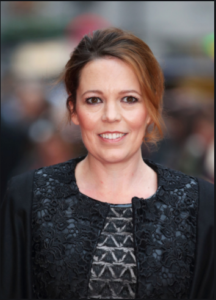 direct access to the accused, who have always claimed their innocence.

Who’s in it?
Olivia Colman will star as Susan Edwards.

Who’s behind it?
The series will be directed by Alexander Payne (The Descendants, About Schmidt, Sideways) and written by Ed Sinclair.

It sounds like something right up HBO’s alley. Since it declares that it is based on true events, I went snooping around a bit to discover facts. I didn’t go too far into the reports and I won’t here either as not to destroy the situation and plot behind this HBO work. The crime took place on a holiday weekend in 1998 in Mansfield, Nottinghamshire England and the crime scene went unnoticed for fifteen years. The more I ponder over this the more it looks like a great story for HBO and Colman. Having seen a picture now of Susan Edwards you can see Colman not just personifying her but looking like her as well..

We will keep you posted on further casting and production news as it develops.