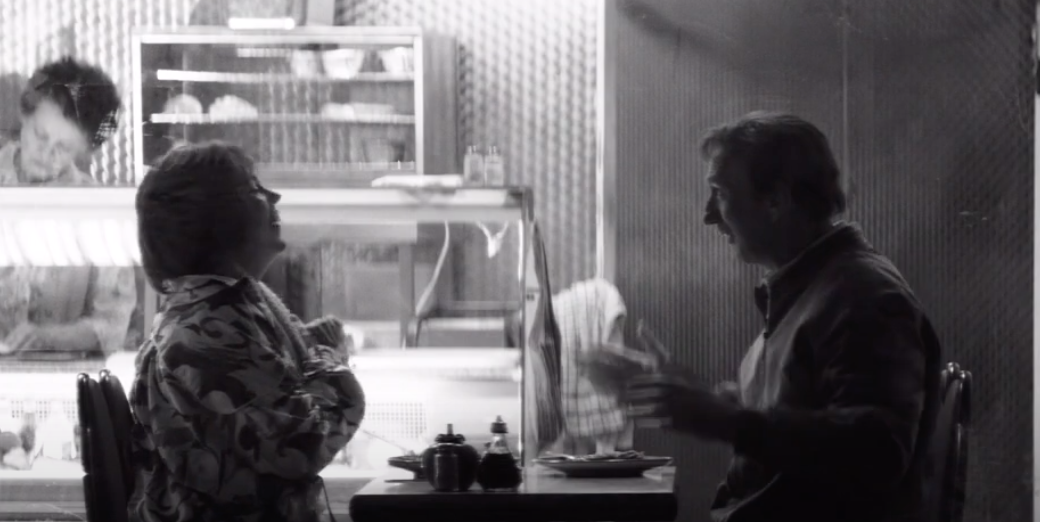 We settle into an old Hollywood feel, reminiscent of the films Chris (David Thewlis) and Susan (Olivia Coleman) love.  We get to see their dating service interviews, a better sense into who they were before they met each other and how they came to fall in love.  You see right away that she has a terrible relationship with her parents (Felicity Montagu, David Hayman).  She’s a grown woman and they locked her out of the house for what?  Going on a date and staying out all night?  Because that’s messed up.  And really, given everything we’ve learned it makes sense in a sad, awful way.  Flashing between the then and now, we really get a sense of how things were not only always bad, but the bad gets pretty bad.

When talking with Tabitha (no one is credited on IMDB, but based on my own working knowledge, I believe it is actress Kathryn Hunter), the police get quite a lot of valuable information on who Chris is.  While Susan has had an epically tragic childhood and adulthood, Chris is not without his own pain.  He needs to fix people.  It’s a pattern.  It makes sense he’d come to the rescue of his wife away from her abusive parents.  He needs to save people but never manages to do it.  It makes sense that the two of them would spend money on themselves to escape their pain.  Susan got cheated out of money from house shares, and as we go further down the rabbit hole their story starts unraveling.

Susan is terrified of guns, she didn’t even like Chris having them in the house.  So claiming you had no problem picking up a firearm and gunning down your mother is hard for us to swallow.  The fourth wall break was hilarious and I kept wondering if we’d see what really happened, more on this in a moment.  But for now, Susan and her story are unraveling.  “He’s the only thing I love. I can’t lose him.”  And as hard as it is to sympathize or empathize with cold-blooded murderers, that’s a love I can identify with and how crushed I would be to lose my partner in any fashion.

Starting the last episode, we see a version of what happened.  The Old West feeling is perfect, watching these two escape their crimes and run.  We revisit the call from Tabitha and I love her walking up to the cops and giving them Chris’s letter.  One thing that struck me was that the Old West was in color while the present day was black and white.  And for about a minute, it bothered me because it felt inauthentic, but then I came around.  The Old West feels more real to them than the trial, than sitting in court talking about what they did.  And in that regard, I was persuaded.

At the trial, we start delving into the science of body decomposition and guns further poking holes in Chris and Susan’s story.  For instance, the gun used doesn’t release casings.  Dum dum dum.  As well as the point that based on trajectory one person likely shot both people, we’re starting to see a different picture emerge.  Of a man desperate to save his wife from her parents and their abuse.  I have to give massive props to Olivia Coleman, who absolutely acted her ass off in this show but especially the last episode.  Because her lawyer is right, there’s a lot of her life that isn’t her fault and she deserved better.  Her whole speech about being broken completely pierced me.  She grew up hating herself, being told she’s unloveable, being sexually abused by her father, emotionally and financially abused by both parents.  Did they deserve to die?  No, but it doesn’t sound like they were contributing a lot to the world either.  In the end, the couple don’t give up on each other or their innocence.  They maintain writing letters and in the perfect ending for their story, they ride off into the sunset.  Chris and Susan Edwards were sentenced to 25 years to life and to this day they maintain their innocence.