Writer/director Richard Shepard has described Tokyo Project as a labor of love, and it shows in every frame. During the filming of HBO’s Girls, the crew traveled to Japan, and Shepard, who was not directing at that moment, was inspired by his time in Tokyo to write a screenplay. Executive produced by Lena Dunham and Jenni Konner, Tokyo Project premiered at the 2017 Tribeca Film Festival.

The film stars Ebon Moss-Bachrach as Sebastian, a businessman from Brooklyn who travels to Tokyo to promote his family’s line of men’s grooming products. While there, he wanders around the city and comes across Claire, an intriguing woman played by the always impressive Elisabeth Moss. The film is a short film, and captures the interlude between the two. The best short films function like poems, capturing a slice of life, a moment of truth or emotion, and this one does precisely that for Sebastian and Claire, capturing their intimate connection in a foreign city. Moss-Bachrach and Moss convey a great deal of emotion and baggage into very limited time. Take in the trailer:

The movie also functions on other levels. It is about the interchange between cultures as much as it is about its two human leads. As Sebastian arrives in Tokyo, the film opens with clips and photographs from famous Japanese films, everything from Akira Kurosawa’s Seven Samurai to Takashi Miike’s Audition, perhaps alluding to an American’s view of Japanese culture, as informed by the way Japan disseminates its own image to the world through the film medium. Later in the film, we see local Tokyo residents shout out the word “Brooklyn,” indicating their own curiosity about Sebastian’s hometown. This is soon followed by posters of American films with Japanese characters, the view of America that the United States exports to the world. There is a beauty in the curiosity expressed by the two sides. 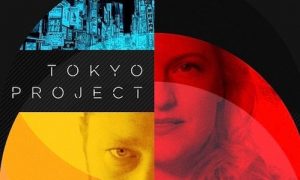 On yet another level, the short interlude also serves as a celebration of the city. The world is divided into those that love cities and those that don’t. As a city animal, I can confirm that we feel more at home in any city (even a foreign one) than we would in our own nation’s suburbia or countryside. There is a magic in midnight ramen, sitting alongside strangers, eating great food, happily alone while surrounded by congenial people. For Sebastian, Tokyo is not New York, yet as a New Yorker, he can find much to love and recognize there. The neon lights comfort city folk, and the magic of Tokyo is photographed beautifully by cinematographer Giles Nuttgens.

At a little over 30 minutes, Project Tokyo packs quite an emotional punch. The film is moving and bittersweet, and worth experiencing.

Project Tokyo is playing on HBO and all HBO platforms as of October 14th.