There is an appeal to Leigh Whannell’s The Invisible Man, to a point. It’s exciting enough, if 20 minutes too long, but does nothing to service its classically regarded predecessors of page and screen. Whannell was always going to be in the tricky spot of helming a Universal Monsters remake that was insisted upon despite the instant failure of the ‘Dark Universe’ and even though it had the coattails of Marvel and DC’s expanded franchises to ride on, the whole idea was eventually canned by the studio. As a result, Whannell was essentially working with a film that belonged in a franchise that no longer existed, so it is understandable if not entirely commendable that his re-imagining involving the historic antagonist was pursued in a way that seeks his own identity across the board. The problem is, however, that Whannell’s apparent iteration of HG Wells’ The Invisible Man strays so far from the source material that it barely warrants the title. Even 2000’s Hollow Man lent more to HG Wells’ original ideas, but it had the decency to sacrifice the name.

You can check out the Kevin Bacon-less trailer below:

What’s perhaps most frustrating is that the team involved in reviving The Invisible Man is formidable. We are forever indebted to Whannell for gifting us Saw, which is still a boundary-breaking turn-of-the-century game changer regardless of how many sequels there were. He’s also more recently responsible for the savagely overlooked Upgrade, in which he proved that the transition from writer to director was all but seamless. And The Invisible Man is well-made – it’s just lazily scripted and overacted to almost video game levels by all but one. 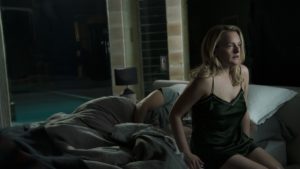 It kicks off decently – an eerie and expensive title sequence gives way to Elizabeth Moss’ Cecelia’s mid-midnight escape from the as-yet-established clutches of her abusive partner Adrian (Oliver Jackson-Cohen) – an ‘optics expert’ who is millions of dollars to the good, even if he can’t seem to afford curtains. There is genuine tension as we learn that she has drugged him to sleep so as to buy herself enough time to grab her bag and hop the fence only to be met on the edge of the highway by her sister who, upon pulling up to a panicked Cecelia at zero dark thirty in the middle of nowhere proceeds to ask ‘what’s going on?’

It is this concerted lack of communication and inexplicable vagueness of expression that sedates any tension that the film had going for it after the first 10 minutes. Rather than commanding reason and (in this case, fully justified) exposition to implore an understanding of the threat at play, Cecelia proceeds to converse with every involved character like they should have some sort of grounded grasp regarding everything she suspects is unfolding. This, instead of actually explaining why she is coming off as an insane person to her closest friends, relatives, potential employers and law enforcement officials. There then lack of immediate support to her cause should come as a shock to no one as these eye-rolling moments continue and, as a result, the people she cares about come to harm. Honestly, if you have reason to believe that you are being stalked by an optics genius who has figured out a way to utilize his own technology to make himself invisible and you have access to his house which is loaded with evidence, just fucking say as much. 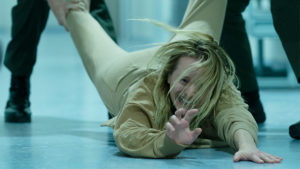 What’s even dafter is the way that multiple characters inexplicably develop into cold-blooded murderers without an ounce of consideration. All of this, ultimately, feels in pursuit of forcing an entertaining night at the movies as opposed to crafting a considered horror-thriller built around any sense of purpose or justification.

But, there are positives. The camera is used to great effect to emphasize an unseen threat on multiple occasions. It is genuinely eerie to witness a pan to a well-sustained shot of nothing when you know that someone else is in the room. A scene between Cecelia and her sister in a restaurant is particularly memorable and extraordinarily executed within fleeting seconds. Outside of these defining moments though, it’s all just a bit angsty. Elizabeth Moss is a fantastic talent as has been proven elsewhere, but comes across as if having been told to deliberately over-egg it to an irritating degree. 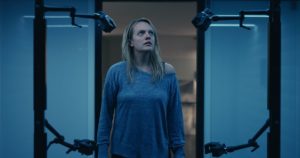 The biggest takeaway of all is Oliver Jackson-Cohen’s limited performance – one that is so multi-layered within mere minutes, it’s almost staggering. For a film so poorly written, he manages to deliver a deft duality that pairs a misguided, violent obsession with a genuine romantic longing which, at the very least, should leave you psyched for his return to the small-screen under the tutelage of Doctor Sleep’s Mike Flanagan in The Haunting of Bly Manor – this fall only on…an alternative streaming service.

The Invisible Man premieres on HBO on September 19th at 8PM ET.