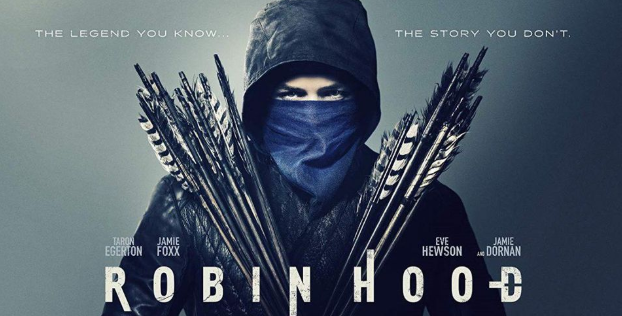 This was a doozy. I enjoyed the 1991 Robin Hood movie with Kevin Costner and Morgan  Freeman very much. I also enjoyed the Ridley Scott remake in 2010 that has Russell Crowe and  Cate Blanchett in it. This one, however, was sorely lacking and was absolutely the worst version to date. To any other Hollywood folks who are thinking about doing another version of this: PLEASE DON’T. Now, where to begin? First, I felt like this wasn’t a medieval version of the movie. It felt like Blade  Runner 2.0 and Monty Python were blended into some weird hybrid time period. It didn’t visually please the eye (although I’m sure some folks will disagree with me) and I felt like it was too focused on the fight sequences, Robin’s upbringing and his relationship with the corrupt law enforcement of the land. Where was the legend? It felt like a very posh rendition and it fell flat.

The latest spin goes like this: Robin Hood (Taron Egerton) was off on The Crusades, but he saw too much death and disillusionment and wanted to return to England. Lady Marian (Eve Hewson) thought he was dead – and since she thought so, she moved on and became involved with Will Tillman (Jamie Dornan), AKA Will Scarlet. The Crown – being super corrupt and wanting to claim Loxley lands forfeit – had Robin declared dead also so they could seize his lands. Ho hum and boring. I think the only enjoyable part of this movie, at least for me, was seeing Jamie Foxx as Little John – a bit of a twist but enjoyable, as he gets Robin into shape and literally shows no mercy on the entitled, snotty lad. 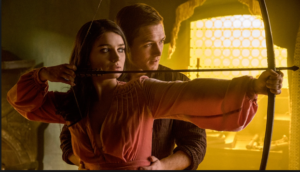 Robin comes back home, sees the townsfolk preparing to rebel against the Crown and finds out that Lady Marian is involved with Will – he makes secret plans of his own. He trains in secret, becomes a proficient archer and tries to right wrongs – he robs from the rich while pretending to serve the greedy Sheriff and Cardinal. There’s a bit about finding out that the Church is plotting against the Crown, driving the theme that money corrupts those in power. And, of course, there’s some relationship drama. It seems that the fires still rage between Robin and Lady Marian. When the rebels are fighting, and everything is at its’ fever pitch, Marian and Robin kiss – igniting anger from Will. Will is furious with Marian and feels like there’s no point in going on with his part of the rebellion. When it appears that the Sheriff is getting the upper hand, Robin surrenders to avoid further harm to anyone. John, who had been previously captured and tortured, ended up escaping and went along as a guard in the Sheriff’s castle, and frees Robin. John has his revenge on the Sheriff and hangs him. Can I reveal that? 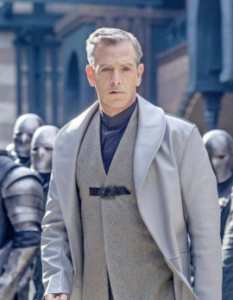 The motley crew flees to the forest of Sherwood, knowing that they have earned the entire wrath of the corrupt Church and law enforcement officials. Will, still ticked off with losing his lady love, is offered a powerful position and switches from being a hero to a villain. The only things here worth noting were some of the actors. Eve Hewson, from THE KNICK For one. Ben Mendelsohn portrays the Sheriff of Nottingham, but we also know him from Star Wars: Rogue One. Not much to see here, folks. Go back to the 1991 Robin  Hood movie – that one had substance, plot, humor, action and adventure all rolled into one. This one, just some nice casting.