When Black Christmas is leaning into Scream, I Know What You Did Last Summer and directly referencing The Shining in dialogue thinking no one would notice, it is indeed peaking. The opening third is a character establishing and festive treat, anchored star turned-ly by Imogen Poots who keeps popping up in things and tends to be the best thing about most things she’s in. In true slasher fashion, she plays a college student 6-7 years her junior, and it is this considered nostalgia that makes the first 30 minutes feel like Christmas 1998 all over again. For proof, keep an eye out for Helena’s gold plated necklace of her own name. 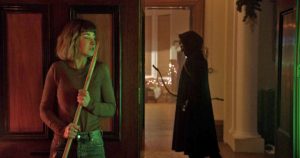 What’s even more perfect is an early scene featuring (for some reason) English professor Cary Elwes confirming himself as the film’s potential villain. It’s on the nose, but you don’t care.

There’s even a campus security guy who doesn’t believe a word you’re telling him about missing young women because he has a mustache and a truck and this is his watch. Everything doubles down on Poots’ Riley as their sorority house descends into a bloodbath.

If there was blood. Black Christmas is a film littered with bodies – but it’s curious PG-13 tagging means that, at times, it is frustratingly bloodless. A core story thread even involves the central characters’ interest in the lack of blood-spattered from the hooded figures inexplicably trying to slay everyone in sight. Instead, there’s a sort-of black goo.

This black goo is the basis of many questions one could conjure whilst undoubtedly enjoying Black Christmas. It boxes off not one, but two cold-weather holidays in one ultra-throwback teen popcorner that over 90 minutes is hard to fault on an autumn weekend. 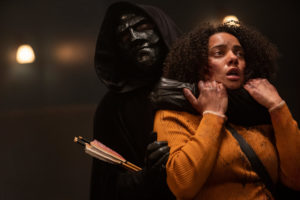 So, the black goo is one question. Cary Elwes’ accent another. Is it actually as woke as it suggests via its visual metaphors, or is it satire? Who’s to say, but figuring out the tone as it evolves is half the fun.

If you like your rapey rich boys chewing gum during super serious frat-cult initiations, your coffee shop final girls staying awesome, and your liberal themes staying light but honest – Black Christmas is enough of a guilty pleasure to switch off to at the weekend, but might not be the first Blu-Ray you reach for at Halloween or Christmas when the classic movie marathons are in swing.

Check out the family friendly-ish trailer below: