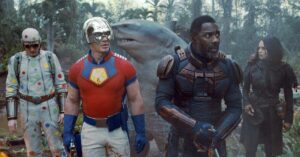 A unique entity that delivers on every front that could have been asked of it, The Suicide Squad is the latest feature from the king of entertaining consistency himself, James Gunn (Guardians of the Galaxy(s), Super). Only five years on from David Ayer’s doomed Snyder-era effort which, to be fair, doesn’t really seem like was his fault, Warner Brothers rightly gave the franchise another shot, this time allowing a proven creative to be creative. And not just that, someone who’s penchant for tonality was never going to be in doubt. Without wanting to spend too much time dwelling on the former, it has to be referenced given that THE Suicide Squad is not just a reboot/reinterpretation, or whatever you might want to call it, but a pseudosequel of sorts. Margot Robbie returns as Harley Quinn, for one. And, it’s the global and marketable popularity of this character – and her as it – that will have largely spurned the necessity for another go round in the first place. But, validation as a sequel by loose definition does not end there. Joel Kinnaman is back as Colonel Rick Flag (if with a totally different personality), as does Viola Davis as morally and ethically questionable Amanda Waller – director of the Task Force X program, which sees imprisoned criminals contributing to the payment of their society debt beyond time spend in a cell. The Suicide Squad, by definition, is applying their collective skill sets to ‘the greater good’ whether that means eradicating foreign radicals who are a threat to national security, or eradicating foreign radicals who are a threat to national security.

Gleefully, the mission set up by Gunn’s plotting expands beyond typical tropes and aims for the stars without reservation or restriction. And, as you’d imagine, the squad learns heaps about themselves and each other along the way, loosely following the sort of character development within team dynamic structuring successfully established in Guardians of the Galaxy Vol. 1. No bad thing, at all. You could even argue the similarities between Groot and King Shark if you really wanted to, but who has the time? 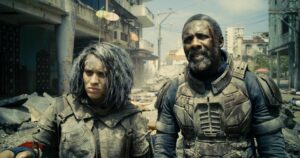 Beyond one of the greatest cold opens of all time (no, seriously) which firmly puts Ayers’ squad to bed, Rick Flag and Harley Quinn find themselves lined up beside a wealth of new characters with considerably more to offer than any supporting team member before them. Leading the way is Idris Elba’s Bloodsport – a technical upgrade on Will Smith’s woefully uncharismatic Deadshot – who is serving time for an alleged assassination attempt on Superman with a Kryptonite bullet, and John Cena’s Peacemaker – a seemingly right-wing conception used to such fantastic comic effect that his spin-off series has already made its debut on HBO Max. Additionally, David Dastmalchian features as the tragic Polka Dot Man (he weaponises polka dots in effect of some of the film’s bloodiest moments – worth the tune in alone), with newcomer Daniela Melchior providing the root of the film’s heart as Ratcatcher 2, who can communicate with any rat – a talent that, you guessed it, is weaponised for the benefit of just how ridiculously entertaining this film is. With the team assembled, they are sent to fictional South American Corto Maltese where the government has been overthrown by an anti-American regime, to destroy a Nazi-era laboratory that has been housing secret experiments known collectively only as Project Starfish. In what would now be the wrong hands, of course, that just can’t be allowed to continue. From there, the film takes its twists and turns with assorted fights and grand set pieces, all of which are densely glazed with purpose and meaning – a trait that enables The Suicide Squad to truly set itself apart, and genuinely stake a claim as one of the best films of 2021. And, just when you think you’ve seen some of this before with regards to superhero sci-fi action, there comes such R-rated artistry and balls to the wall lunacy that what was a wry smile evolves into a beaming grin by the time all is said and done.

The Suicide Squad debuted on HBO on Saturday, January 15th.