In perhaps Roland Emmerich’s most self aware film to date, Moonfall is an absolutely blast if you want it to be. Yes, it’s bad. Yes, it’s stupid. But in a world so increasingly serious, sometimes it’s fun to blur the lines of parody and just have a silly, good time at the movies.

In short, the moon is discovered to be out of orbit by Samwell Tarley, who is as cringeworthy in this as in any Game of Thrones appearance. He is truly an appalling actor who shouldn’t be allowed anywhere near the likes of Halle Berry, who is equally terrible. Why she is a misfire, though, is her own undoing in that you can’t imagine Emmerich to have nurtured the performances of his actors. She just takes it all a bit too seriously and comes off as wooden, where Patrick Wilson on the other hand, understands the assignment and delivers a typically affable turn that is forever course correcting the film as a whole. There nothing worse than a bombastic, balls-to-the-wall, brain-at-the-door blockbuster that is additionally joyless (see Transformers: Revenge of the Fallen for case in point). 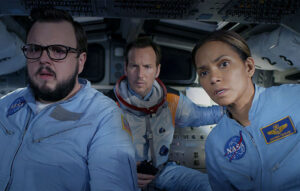 Nay, Moonfall has all the Emmerich trademarks of rag tag individuals’ paths colliding as they collectively strive to survive a colossal global threat – millions dying in the process, but as long as they make it out alive, it’s all a-okay. Where he initially achieved irrefutable success with this model in the form of Independence Day, and then again with The Day After Tomorrow…and then again, to a point, with 2012, he just hadn’t left himself any room to grow by the time Moonfall came about. Moonfall, to put it bluntly, is like if Roland Emmerich made a Roland Emmerich movie. It does everything you expect it to do, and then literally takes it to space. The question is, is there room in the world of cinema for what is now meta-Roland Emmerich fare, when so many cinema-goers have grown tired of his output for the best part of the last two decades? The answer is yes, because it’s so damn fun in the moment. Sure, you forget about it immediately afterwards, and will perhaps never watch it again, but in that 10 minutes after the credits roll, you’ll be glad you did. Nevermind the science or severe lack of (it’s insulting in the best way, just how little this movie cares), at one point, Halle Berry’s phone rings and it’s “NASA” calling. As in, the front desk? What is this general NASA communicade? It’s absolutely ludicrous on a granular level, so you can only imagine how breathtakingly daft it all becomes once the moon is hurtling towards earth, and once Samwell Tarly goes to space.

Moonfall is streaming now on HBO Max, and you should definitely mix a strong cocktail and watch it this Saturday.