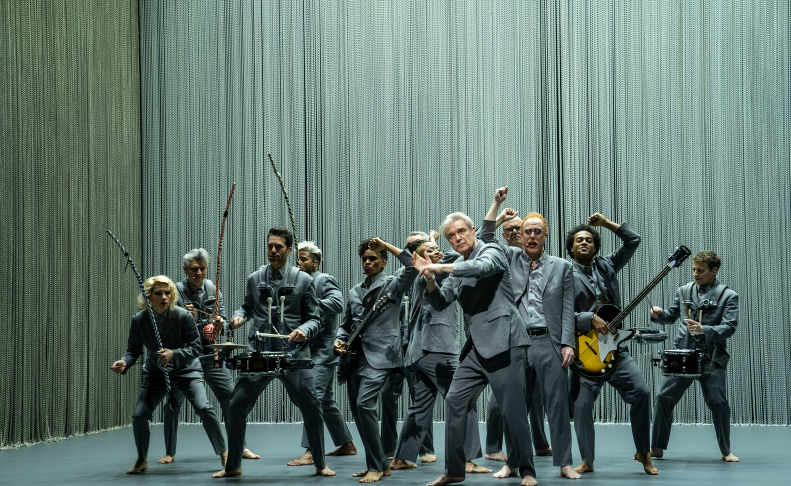 I always enjoy a concert special when they appear on HBO. Through the years I can remember seeing Air Supply, Diana Ross and Madonna to name a few; they are rare but memorable. Now, to that list, we can add David Byrne of Talking Heads fame. Decked out in gray suits and bare-feet Bryne and his troupe take a simple stage space, Broadway’s Hudson Theater, and turn it into a conduit of pure musical energy. Now you can say many a band puts out the energy, but most are wired up with booming speakers. Not Byrne and company. Though well microphoned, of course, they are untethered and free-roaming, in almost constant motion. For example, they have a keyboardist, but he isn’t at a piano but has a keyboard harnessed to him and there are a series of drums in play, but none are a fixed drum kit. It is a fun, energetic band of musicians keeping up with the lead performer every step of the way. It is quite unique. 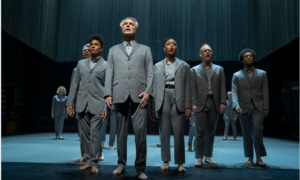 Byrne runs through a mix of tunes, some from his earlier days and some from his most recent album American Utopia. He even uses, as stated with her permission, Janelle Monae’s eulogy to fallen innocent black lives from Emmett Till to Sandra Bland, to George Floyd called “Hell You Talmbout.” He covers his playlist, complete with “Burning Down The House” with just occasional interjections of dialogue; some are ponderings on human nature, some political comments, some humorous observations, but all tie together illustrating the importance of our shared connectedness. All of this done in constant motion for over 100 minutes, all of it specifically choreographed in the somewhat robotic Bryne’s style. Yeah, even the guy touting the bass drum and doing so without missing the beat.

So, we have a unique experience and the one-of-a-kind musical musings of Byrne, instrumental & vocal backup to a T and constant movement. What’s left is the cameras of Spike Lee to capture it all just right. There are just as many camera angles as there are stylized hand gestures. Even if you don’t know the playlist you can still get caught up in the energy and message that comes from David Byrne and company. It’s a blast!

DAVID BYRNE’S AMERICAN UTOPIA can be found streaming on HBO and HBO Max and across HBO channels.