Oh, wow, this is bad. No, no, I don’t mean the limited series LAETITIA itself but the situation we find ourselves in while watching. I mean, we have a scene where an irate father dangles his months-old daughter over an outside balcony for starters. We have a disclaimer that sexual violence is depicted and a sexual abuse hotline number posted after the end credits. Plus, the level of sadness, confusion and grief raises pretty high in the 50-minutes it takes to watch this premiere episode. As I said, this is bad.

That leads to the question of why I am sitting through such a tough watch? Well, come on, most of us do watch that sort of stuff because it is best to watch and connect and understand those types of evil behaviors and negative emotions via a piece of entertainment than be subjected to them in real life. In short, I appreciate the grit of this story from the safety of my own home. Here is my take on France’s LAETITIA from Academy Award-winning director Jean-Xavier de Lestrade.

A press release states: Based on true events, the miniseries chronicles the disappearance of a teenage girl in western France. Left to reconstruct the teenager’s final hours for answers, investigators (led by Yannick Choirat) begin to uncover deeply troubling details of Laetitia’s (Marie Colomb) and her twin sister Jessica’s (Sophie Breyer) upbringing. As they search to uncover the details behind her final days, this highly polarizing case casts a sharp eye on France’s legal system, police force, social services and how a single act of violence can impact an entire country.

The story gives us a detailed missing person’s case and the background lives of the missing and her family. The victim is 18, but the story flashes back to when she and her twin sister were infants and when they were toddlers and, of course, the days leading up to the crime. Not only do the investigators trace back Laetitia’s final days but they also shape her past relationships and childhood to get a complete composite of her. As we soon learn, she had a troubled history.

The twins were born into a violent relationship. So much so that their lives and their mother’s life were threatened. That is evident by the balcony scene and the violent sexual assault of the mother. It was a tough scene to watch, though well-executed and important to the story. In the aftermath of the violence, we see the battered & bloodied mother stumble out in the early morning for help, we see the husband/father arrested and the girls were taken into protective custody. That takes us to the present day where we learn then that the twins, now older teens, had been placed with foster parents.

As we get this past history played out for us the investigators on Laetitia’s case learn this history via interviews and artifacts of the victim’s life. There is a procedure and detailed methods to it all. Even Jessica is heavily questioned. Some information gleaned was written works in Laetitia’s hand that seemed to suggest suicidal tendencies, though the word ‘suicide’ was never mentioned by investigations when questioning pursued the notion. It is so much a potential factor in the matter that when a suspect was detained the authorities were not totally convinced that he was guilty of this crime, even though he is a repeat offender about town.

That suspect is one Tony Meilhon (Noam Morgensztern), a troubled soul who confesses to accidentally running into her, taking her home to try and help her only to have her die at his place. In a panic, he dumps her body into the river, or so he says. All this is not a fact yet. And that is where the story leaves us. Laetitia’s background and circumstances have begun to take shape and a valid suspect is in custody. It is up to the investigating party to now connect the dots. And the audience, including me, is caught up in the process and out for the truth. 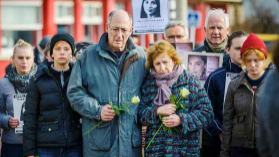 To be honest, we don’t move the story along too far in the second episode, but, in a way, that is okay because it truly represents the agonizing and meticulous investigation process. By now, we have all seen crime procedurals whether it is a Dick Wolfe production or something else. We know how they scrutinize every fiber of fabric & hair and every fingerprint laid & comment made. Detective Touchais (Yannick Choirat) is no different. What makes it here is a look into how the French do it plus the fact that we are, by now, invested in what happened to Laetitia.

The biggest element in the second part is more revelation on the early life of Laetitia and her twin sister Jessica. Two years after the attack on their mother we learn that she is completely unfit, mentally, emotionally and financially we can surmise, to be responsible for the girls the only recourse is to put them in the custody of their father and we get a good look on how well that pans out thus, further compounding the stress & trauma these little one’s experience. Child Care swoops in and, of course, we know they end up in foster care. The other revelation of the week was testimony from a friend that Laetitia was a cutter – she inflicted self-harm. It isn’t a big scene that spells it out for the viewer; it isn’t blatantly stated until a different scene minutes later when Touchais askes Jessica if she knew her sister was a cutter.

The history of trauma and self-harm doesn’t help the matter at all because they cannot cleanly pin the crime on Meilhon if those lingering circumstances cloud the case. They could just lock the maniac away and call it all done, but that isn’t justice, that doesn’t prove without a doubt what happened to Laetitia. Did Meilhon murder her? Did Leatitia purposely seek out dangerous contact? Did she commit suicide?

We are not able to answer that just yet. One linchpin in the matter is the shared behavior of Meilhon and Jessica. What do they have in common, you wonder? When they each in turn are in front of the detective they clam up, they are tight-lipped. Meilhon ranted to guards but when put to the test of what happened to Leatita Touchais gets nothing from him and Jessica utters very little to him when he continues to question her. Once that pin is pulled and some explosion of truth happens then this case can move on. Detective Touchais has to be diligent or change his tactic to turn it all around.

We will pick this back up after episodes #3 and #4. Remember LAETITIA.