By now, we get it. It is a grind to go through a crime investigation. But here we are in Episode Three and something has got to happen here, some revelation has got to propel this story along at this point. And from the opening moments, we really get a sense that that will happen. Between flashbacks to the night of Laetitia’s disappearance to the present where we see Detective Touchais tracing her last night on a map, all start to fall in place. Sadly, she spent that last night partying around the countryside with nasty Meilhon. What helped piece the timeframe of events that night was her texting calls to her friend, William, and the GPS stamp those texts were coded with. Still, we hope for some big breakthrough that nails Meilhon as truly the guilty party.

As that night plays out, we learn that Meilhon took Laetitia on a drive and eventually returned her to a hotel bar they went to in order to retrieve her scooter. It was then that she was witnessed arguing with Meilhon and that she called William to tell him that she was raped. Meilhon followed her as she headed home. Finally, events are shaping up, some I won’t reveal in fear of exposing the whole story. The viewer gets to see a vital conversation Meilhon had the following

day after Laetitia’s disappearance and the investigators get to find out by piecing security camera footage and calling in Meilhon’s cousin seen on the footage. Such a reveal however has just widened the search area for any remains. Moving forward the detective will learn the life of Meihon as opposed to Laetitia and understand his world and see if that opens up any idea as to where he would have dumped the body of the missing girl. So now, we start to get flashbacks into Tony Meilhon’s life as a youth and see the police interviews with his mother and an abused ex-girlfriend revealing his history. The ex recalls Meihon’s favorite fishing hole and the divers take to the lake and they retrieve something. All this is covered by the media leaving Jessica so overwrought with grief to the point of fainting and hitting herself.

In light of all this, the case has become a national issue which included comments from France’s President at the time. He met with Laetitia’s foster parents which sparked ire in the twin’s biological father Franck (Kévin Azaïs) who went to officials asking where his consolations from the President were. I didn’t expect that coming at all. He was at a candlelight vigil also and showed up lakeside when most of the body was recovered. He says he has paid for his past crimes in relation to his children and deserves to be treated as the grieving father he is. His presence proves an interesting perspective to it all and again, popped into scenes unexpectantly for this viewer. He added a strong element to the story.

All facets of society are in the mix by episode 4. The judicial system is sitting on a suspect, the Crime Squad is everywhere, and the media is dogging them each step of the way as the family grieves through it all. Just when we thought things were ugly enough, we find that the country, including its President, are angered with the criminal system that a known manic like Meilhon had ever been released from prison unsupervised to commit atrocity again and to sit and spin this time while the judicial system bogs down. Think how long it took for Robert Durst to be convicted long after THE JINX aired on HBO. The system is indeed slow. I never that this case sparked a huge protest in France. Footage of protestation is used in this episode; the courts are forced to just shut down, thus closure for Laetitia’s family seems unlikely. This story is not just about the crime but about the justice & legal system as well. 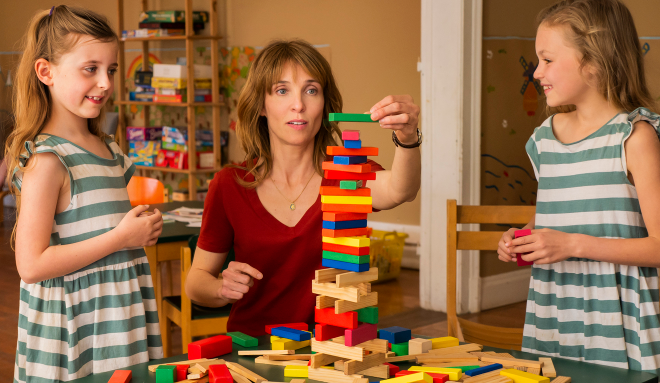 Three short but big scenes played out in this episode. One was the family being gathered before the judge to hear the results of the autopsy. Death by strangulation, drugs in the system. That last fact was verified in a flashback just prior that showed Meilhon getting Laetitia to snort a little. Both fathers were present at the report, and both had strong words to say pleading their respective viewpoints. The second scene was of Franck showing up at Jessica’s home to try to reach out to her. She wouldn’t allow it. The third scene is one that really hit the nail on the head. Over coffee, Detective Touchais has a conversation with the original Child Services caseworker who worked with the young twins; she is Béatrice (Alix Poisson). He unsettles her and he hoped he would as there are far too many people in this matter who are too tight-lipped. Think about it. Meilhon never uttered a word to him Jessica spoke very little when questioned and Béatrice doesn’t disclose anything. As she storms out her expressions seem to indicate that she indeed knows something. Touchais knows there is a secret about the girls that would unlock the reason behind Laetitia’s suicidal tendencies and recklessness. We await who finally utters that truth and how that will help the matter at hand.

The last moments of the episode take us back to the younger twins, this time at 13, moving into their new foster home. This makes the fifth set(?) of actors to play Laetitia and Jessica in their younger years. We saw them as infants, at age 6, age 8, now 13 and 18 and the casting of look-alikes was damn good. Of course, by the time this series concludes we will have seen the complete progression of their lives. What is left at this point is someone to speak the honest truth. It must happen in Episode 5.

LAETITIA Episode 4 debuted Monday, September 20.  We will return to the story. Discover LAETITIA Monday nights at 10:oo and on HBO & HBO Max.