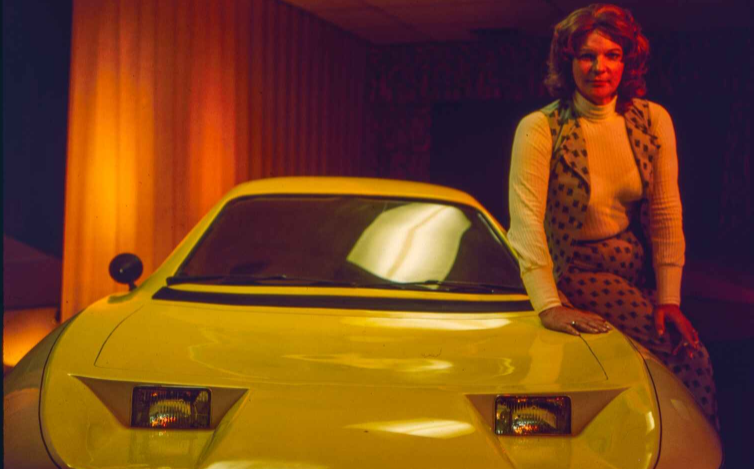 Yes, I know I’m behind as I jump into the documentary films HBO has offered so far in 2021. You’d think I’d had all the time in the world to catch up with 2020’s films due to the pandemic but I didn’t as by day I am an essential worker. I’m just now getting into 2021’s entries. So, here we go.

Overview: This four-part documentary series from Emmy-winning producers Mark and Jay Duplass (HBO’s “Room 104”) and directed by Nick Cammilleri and Zackary Drucker, traces the audacious story of Elizabeth Carmichael, a larger-than-life entrepreneur who rose to prominence during the 1970s oil crisis with her promotion of a fuel-efficient, three-wheeled car known as The Dale. At a time when three big American automobile manufacturers ruled the road, Liz launched a futurist vehicle that promised to get 70 miles to the gallon.

Expectations: I like the notion of this one. It has a charismatic but mysterious lead character, an interesting set-up in the new-fangled car and what appears to be a rarer method of storytelling to play out the plot. Who is the ‘lady’ and what is the ‘Dale? I’ll admit I’m curious.

Gut Reaction: The biggest takeaway for me was how this was packaged. It was not just a bunch of talking heads reminiscing about how ‘daddy’ became ‘mommy’ and how the Dale was to become the answer to everyone’s problems. It was told in a clever way, whether that was the Duplass’ idea or of the director’s doesn’t matter. It was just clever and it worked. Because of the style of the piece, with the collages & animation, you don’t mind that the piece plays out in four parts, each 50-some minutes long. The first part dives into Liz Carmichael and the plans for the car; part II gets us into just how the whole operation went down and how Liz conducted herself and her business; part III delved into just how the house of cards started to crumble due to heavy media investigation and the resulting trial; and the final part plays out Liz skipping sentencing; on the run and finally to prison. Plus, the installment looks at her life post-prison and examined her persona as a historic transsexual. One thing that I appreciated is that throughout series, the viewer was provoked to think things through. Many questions arose like, “Was this life-long conman just posing as a woman to escape detection?” and thoughts like, “[S]he never claimed for the longest time that she was transgender but fabricated a whole life as a woman, thus still being somewhat of a con.” It proved interesting and provocative to engage in those thoughts. The whole question of gender did not arise until the trial for fraud arose and then, as prosecutors do, her identity was challenged as if that had some bearing on the legal matters. The final installment sort of filled in its hour with a look at transgender males through history and how Liz fit into that mold and persevered.

I really could write paragraphs but I think you get the idea.

Conclusion: You, like the people who worked for her, were drawn into the life of this charismatic con artist. Her bravado, feistiness and vision had people going. And Duplass Productions and Cinemation found a novel way to get the story told.