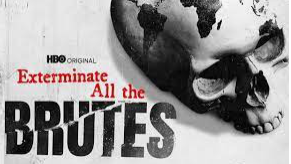 Overview: HBO Documentary Films’ EXTERMINATE ALL THE BRUTES, from acclaimed filmmaker Raoul Peck (“I Am Not Your Negro,” HBO’s “Sometimes in April”), is a four-part series that provides a visually arresting journey through time, into the darkest hours of humanity. Through his personal voyage, Peck deconstructs the making and masking of history, digging deep into the exploitative and genocidal aspects of European colonialism – from America to Africa and its impact on society today – challenging the audience to re-think the very notion of how history is being written.

Expectations: This looks like one tough topic to take in, doesn’t it? In fact, some HBO subscribers just might be a bit taken aback. This is a deep, serious look into how White culture has controlled the world by horrible means for so long. There is no question the topic should be discussed, but is it one we want to hear? Is it one we want to sit four hours through?

What intrigued me most is the talk of Raoul Peck’s approach to the subject; how he “artfully weaves” different film techniques to convey history. I am looking forward to seeing just how this story is told.

Gut Reaction: Wow! I won’t lie, it is pretty grim and appalling. I mean, not the series directly but the subject matter of Colonial Expansion and how it played out across this globe. The archival images, both still ones, and moving ones are pretty hard to look at as they depict genocide, depravation, mutilation, slavery and massacre after massacre all at the hands of the White Man. We are talking systematic slaughter through the centuries and across the continents in the name of Gods, kings, and the blatant right to just take what is wanted. 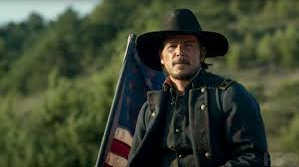 The claim that this series “artfully weaves” all this creatively is indeed met. Raoul Peck boldly and relentlessly spares no atrocity and no medium to get that story told. He breaks it all down across the four installments. In Part 1, “The Disturbing Confidence of Ignorance”, he sets up the case that violent human action and subjugation has been happening for centuries, and just because we plead ignorance and put it out of our mind does not mean that this history did not happen and that it is a long pattern of behavior that still happens today.  Josh Harnett adds tense personifications through history here which only enriches the message.

Part 2, “Who The F*** is Columbus”, shows us four historical examples of how we have failed to see the dangers. Peck revisits the stories of Christopher Columbus, the Alamo, the Trail of Tears, and the American slave trade to show how textbook history, pop culture, and official government reports all skewed the real truths as to what happened. 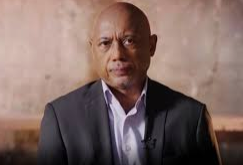 This episode stood out for me as it depicted just how Columbus ‘discovered’ the Americas (which as Peck, pictured left, says was never really ‘lost’) and how a John Wayne movie & the like painted a more patriotic rendering of the Alamo than what really went down and how the government’s careful wording about the ‘savages’ justified the incident known as the Trail of Tears. The real truth is skewed! Onto Part 3, entitled “Killing at a Distance or… How I Thoroughly Enjoyed the Outing”. This installment points out how industrialization and militarization just increased the dominance they hold over the world. Horrific Holocaust and Japanese atom bomb imagery dominate here. By this time into the docu-series, I’m numbed. How could Raoul Peck spend his adult life chronicling and scrutinizing all this? He is a better man than I for it.

In Conclusion: This is, whether we like it or not, the true history of how the world was ruled. ‘Civilized’ men wanted to ‘exterminate all the brutes’ but Raoul Peck points out just who the ‘brutes’ really are. Can you handle the truth?