Overview: Telling extraordinary stories of courage and perseverance, the groundbreaking HBO Documentary Films:  EBOLA: THE DOCTOR’S STORY, BODY TEAM 12 (2016 Oscar nominee for Best Documentary Short) and ORPHANS OF EBOLA each approach the pandemic that claimed thousands of lives from different perspectives. Following the doctors, the response teams and the children left orphaned by this devastating disease, the trilogy paints a picture of the Ebola crisis over a period of eight months, from the outbreak’s rapid escalation, through the height of the epidemic, to its wanin. These documentaries highlight the urgent need to treat the sick, the grim and dangerous collection of the dead, and the aftermath of survivors picking up the pieces. 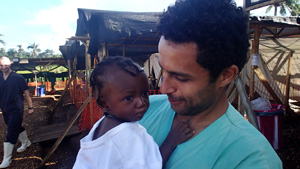 Ebola: The Doctors’ Story: Steven Grandison’s documentary joins Dr. Javid Abdelmoneim (pictured), a British emergency response doctor, inside a Doctors Without Borders Ebola treatment center in Kalilahun, Sierra Leone as the epidemic escalates dramatically in fall 2014. Attached to the doctors’ goggles, cameras designed to enter the “hot zone” of the facility reveal for the first time the realities of battling an unprecedented outbreak. Dr. Abdelmoneim, along with local and international colleagues, fights for the survival of his patients, and helps families reunite or cope with overwhelming loss.

Body Team 12: 2016 Oscar nominee for Best Documentary Short, Body Team 12 highlights the heroic and heartbreaking work of Garmai Sumo, a female Liberian Red Cross worker tasked with collecting the dead from homes and villages, and removing the bodies to halt transmission of the disease. In a tightrope act of high-risk filmmaking, director-journalist David Darg embedded with the Red Cross on the ground in Monrovia, Liberia, during the height of the outbreak. His poignant images recount the Ebola crisis through the story of Sumo, the sole female member of the body collection team, who reflects on the cultural and social upheavals caused by the disease, as well as her resolve to fight for her country’s future. 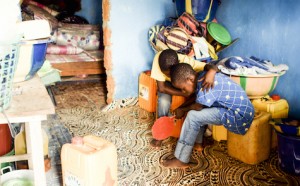 Orphans of Ebola: Ben Steele’s work follows Abu, a 12-year-old boy from a Sierra Leone village, who loses eight members of his family and must restart his life elsewhere. Filmed over a period of four months, beginning just after the height of the epidemic in December 2014 through the reopening of the country’s schools in April 2015, Abu’s story illustrates the incredible bravery of the thousands of children who have been orphaned by Ebola as they reconcile with the past and forge new lives.

Expectations: Due to works like VICE Special Report: COUNTDOWN TO ZERO and other media sources I feel pretty versed in the Ebola virus and its hold on Western Africa. So to have these three short subject documentaries come along and examine the epidemic once again certainly is not something I need to see. Whether or not they add anything different to the reporting already been told I am just not sure, but they have been touted as acclaimed films; especially Oscar nominated BODY TEAM 12.

I understand that this medical crises is a hot topic and every film maker chronicling our world needs to delve into it so I’m sure their opportunities were not squandered. Collectively they will take less than 90 minutes to watch. I hope I get something new out of it. Here is the trailer for the entire trilogy:

Gut Reaction: Well, the simple fact of the matter is that I was fooled. These films, each in their own way, did offer a different take on the front lines in combating the deadly virus. I thought that with all I had seen and read that this topic had nothing more for me and I was wrong.

The rest of this post will make that clear starting with EBOLA: THE DOCTOR’S STORY. All the stories I have seen on Ebola do two things consistently. They talk in general terms about dealing with the overwhelming task of battling the virus and the sheer number of people infected and dying. They also do all this standing at a distance. Some reports are in labs far rem 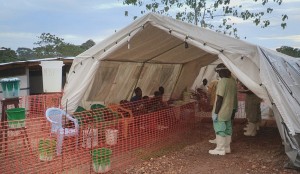 oved for Africa while others are on the scene but also out of harm’s way. All on camera interviews are away from the quarantine tents. Plus, they only talk to doctors or officials but rarely the people. That is not the case with this 41 minute film. Not only do cameras record those kinds of moments, but with a camera mounted on the suit of Dr. Abdelmoneim you get a rare glimpse with the patients in the makeshift centers liked you haven’t seen before.

The biohazard gear they wear, including multiple layers of latex gloves, are seen all the time in the various footage about, but this documentary really shows the crucial significance of them and the ritual of changing in and out of them. It is an aspect of the situation I’ve never seen before. The Doctor’s day-by-day dealings in the ward with the afflicted is truly an experience worth seeing. Be warned, though that you will be shocked; a person seen talking to the doctor can show up dead an hour later. The very nature of seeing the staff go their paces is a whole better experience than them just standing elsewhere and relating it to you.

Body Team 12 tells of a body collection team that goes to the villages and removes diseased remains to a makeshift crematorium and what a hard and dangerous job that is. Again, this is something seen before, but this is the first time I heard the words of a member of a unit before.

The impassioned words of Garmai Sumo are subtitled on the screen as she carries out her duty in the hopes of freeing her country of Liberia from this scourge. What cinches it for me as an Oscar nominee isn’t so much the footage shot but Garmai’s words. She shows compassion, anger, diligence, sadness and fear as she tracks down deceased persons, consuls loved ones into releasing the bodies and denying them any chances for mourning, closure or burial because of the large health risk involved. I can’t not show a clip to hear Garmai’s words for yourself.

You always hear about the breakup of families and of the numbers of displaced children in reports, but I’ve never come across one that actually talked to a child with no immediate family left after Ebola entered the home. Lo, and behold we are given Abu (pictured) in Orphans of Ebola. This child’s dilemma is sad for sure, but the way this youngster holds up his head and carries on his life makes him a great Poster Child for the cause. You can carry on. His matter-of-fact words relating the loss of family is something to witness. He, along with an adopted brother named Abdul, even ventures back into his family 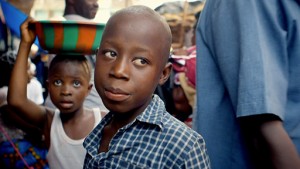 home to collect personal items and the moments spent there are moving for both of them. But then when it comes time for the boys to part ways and be divided up to live apart it is a mere quick handshake and so long. Abu’s story is one I greatly appreciate that I got to see.

In Conclusion: Very simply, in the end, I am glad I saw this trilogy of short films. I was mistaken that I had seen all there was to know about the Ebola outbreak in Africa. These films actually took us in to the quarantine tents, let us know about a few of the workers behind the layers of latex, talked with the displaced right there at the heart of the crisis. Thanks must go to those documentarians for going into harm’s way for putting a personal face on it all. Thank you for sharing the stories of Dr. Javid Abdelmoneim, Garmai Sumo and Abu.

Next: A total change of pace with another documentary about a cinematic artist. Coming March 21 is EVERYTHING IS COPY – NORA EPHRON: SCRIPTED & UNSCRIPTED.