Overview: After struggling with mental illness for most of her life, New York artist Ruth Litoff committed suicide at age 42 in 2008 by overdosing on 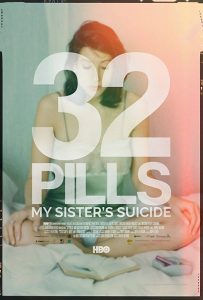 prescription pills. Six years later, her younger sister, Hope Litoff, decides to film herself while she empties a packed-to-the-brim storage unit filled with Ruth’s belongings, driven by the need to understand Ruth’s illness and desire to end her life – but as she pores through the items her sister left behind, she must exorcise the demons that threaten her sobriety.

Both a celebration of art and an unvarnished exploration of mental illness, Hope Litoff’s directorial debut tells the powerful story of one sister struggling to know and accept the other in a way she was never able to in life, even as she learns to live with the pain of loss. Featuring home movies and family photos, Ruth’s journal entries, interviews with Ruth’s and Hope’s friends—who remember Ruth’s struggles, as well as her magnetism— and Hope’s video confessionals, where she provides a window into her own unraveling as she examines her sister’s past this documentary is a vivid portrait of a complex, brilliant artist, whose bursts of creative genius lived alongside dark depression.

Expectations: Well, here we go with a documentary about mental illness, depression and suicide. This is a broad topic that has been examined and discussed many a time by documentarians and this HBO viewer. The subject even invades films where that is not even the main topic. We have even seen it as of late, via EVERY BRILLIANT THING and CHRIS GETHARD: CAREER SUICIDE, as performance art & stand up. So, as I go into Hope Litoff’s 32 PILLS: MY SISTER’S SUICIDE I am looking for something different; I am looking for a different angle to this often broached topic. Its premise reads intriguing enough and then there is the trailer. Take a look. 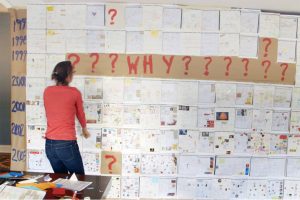 Gut Reaction:  The presentation if this documentary offered a chance for a lot of thought and opinion which is always a good thing for a documentary to do. It was so much a process of overthinking it that I was losing focus of the film. Now I’m faced with making sense of it all.

The attempt here was to understand Ruth Litoff and what led her to suicide. We didn’t get that answer, of course, even with all the clearly created journal entries. Hope didn’t get it either. In fact, we get more of Hope than Ruth. We got a documentary about Hope’s mental state of health, her grief, her obsessiveness, her whininess and her loss of clarity. The film, for me, was about dealing with the effects of someone’s suicide more than understanding why that person committed it. The documentary I got was alright in itself but it miss-represented what I thought it was about and who it was about. This documentary is about Hope Litoff.

It had a great premise which was to understand sister Ruth by finally going through her belongs locked away in storage. The lineup of pill bottles was a shocker & so was the wall of journal pages but instead of having the lasting image of those items adding up to something strong about dead Ruth, Hope was the focus instead. The lasting 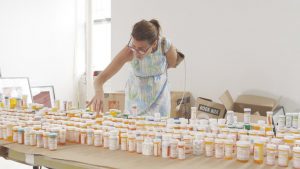 moment from the pill stash was Hope’s crazed decision to sample some of them to feel what he sister felt on them. What? The apartment space wallpapered in pages just showed Hope’s obsession. She is so absorbed in this journey that he husband says that she is forgetting those in her life that are still alive. The icing on the cake is his her falling off the sobriety wagon.

It ends up quite an interesting documentary, just not the one I thought it would be. It left me wondering that Ruth & Hope are quite alike in some ways.

Bonus: Most documentaries have a life before they get to HBO. This bonus is from a special screening of the film.

In Conclusion: The moment that saves 32 PILLS: MY SISTER’S SUICIDE and redeems Hope is the art exhibit of Ruth Litoff’s photography work. I’m so glad for her that she could pull off the event honoring her sister. We put up with Hope’s struggle and got rewarded with Ruth’s work being seen and an unexpected, intriguing film. In the end, I wouldn’t call it a film about suicide but one of obsession and grief.

Next: Still trying to catch up we review HAPPENING: A CLEAN ENERGY REVOLUTION from 12.11.