Overview: Every year, the YoungArts program of the National YoungArts Foundation for Advancement in the Arts offers 15- to 18-year-old emerging artists from

around the country the chance to be mentored by some of the world’s greatest artists. Those sessions have been called a Master Class. Since 2010 HBO Family has been airing highlights from these special sessions.

The artists giving of their time and talents have been opera singer Placido Domingo, actress Liv Ulmann, choreographer Jacques de’Amboise, installation artist Olafur Eliasson, architect Frank Gehry, choreographer Bill T. Jones, conductor Michael Tilson Thomas, filmmaker Julian Schnabel and opera singer Renee Fleming. Each artist in the series has taken on students and worked with them and a performance respective to their artistry is always the end result. Now added to the list of mentors is vocalists Bobby McFerrin. 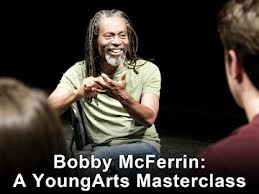 Expectations:  Though I am familiar with this series having been in HBO Family’s line-up I never actually watched on. I did watch this installment as a challenge from my Editor-in-Chief. My expectations for this thirty-one minute film were simple ones. They were to see an artist go through his paces and teach artistic youngsters his brand of art.  This master vocalist of, Don’t Worry Be Happy fame, is adept at improvisational skat singing and I’m a bit eager to see just how he teaches his wards to perform his style of song.

Review: The film was just the right length and a fun watch. Though I expected nothing less from the master in session the delight was in seeing the students really absorb what they were being taught. It all became q

uite evident as the performance completes the process. I have no clue of the functionality of the YoungArts program but I am sure they have an extensive process to determine which students get to participate in such an experience. It proved to be a rewarding time, clearly, for them. It also can prove rewarding for those viewers who appreciate the mechanics of what it takes for an artist to do what they do.