Just when you thought Halloween tricks & treats were all wrapped up like a mummy for another year we lead off the return of Development Slate with a look at horror content that looms in HBO’s future, pandemic permitting. 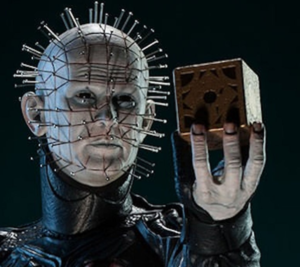 HBO put into development a horror series based on Clive Barker’s novella The Hellbound Heart, that cinematic fans know as HELLRAISER. Heading the task is David Gordon Green, director of the latest Halloween & producer of Danny McBride’s HBO library. But the best person on the project to see that it gets done right is Clive Barker himself. He joins the creative team as an executive producer. Said Barker, “…delighted the Hellraiser mythology is seeing a new life. It’s time the stories went back to their roots. I’m eager to bring to a new audience the most powerful and ancient elements of horror: the darkest evil invading our human lives and how we must find in ourselves the power to resist it.”

If you are out of the loop on just what HELLRAISER is then you haven’t been paying attention. There are 10 films alone and its lead character, Pinhead (pictured), has been a pop culture icon for decades. The idea for the series is to create an elevated continuation and expansion of the well-established Hellraiser mythology. It is by no means a remake, but rather assumes the past mythology to be a given. Expect a revisit from Pinhead, the merciless leader of the Cenobites, the formerly humans-turned-demons that live in an extra-dimensional realm and are activated through a puzzle box called the Lament Configuration. The Cenobites come from hell to harvest human souls and keep balance between good and evil.

Though Green is the lead director, actual showrunner duties fall to Mark Verheiden (Battlestar Galactica), who also serves as a writer alongside Michael Dougherty (Trick r’ Treat). Though HBO has had horror elements in programming before, this series will really ramp it up to its extreme. It will be a strong example, especially with Barker on board himself, to be a gripping examination of the meaning of horror. Beware of the Cenobites!

Get Ready to Welcome THE BABY

HBO & Sky have been a pretty good partnership so far. For example, that union has given us CHERNOBYL and THE THIRD DAY. Now it has in the works a series labeled as a Comic Horror, entitled THE BABY. Our source for this news is via an official press release as follows:

THE BABY is a funny, raw examination of motherhood as an institution: a set of unspoken rules that affect women differently depending on how they’re viewed by society. If you’re not scared by that, you should be.

When 38-year-old Natasha is unexpectedly landed with a baby, her life of doing what she wants, when she wants, dramatically implodes. Controlling, manipulative and with violent powers, the baby twists Natasha’s life into a horror show. Where does it come from? What does it want? And what lengths will Natasha have to go to in order to get her life back?

Terrifying and darkly comic THE BABY gleefully deconstructs the “joy of motherhood,” exploring the powerful anxiety of whether or not to have children, questioning who gets to choose “motherhood” and who doesn’t.

She doesn’t want a baby. The baby wants her.

Okay, so just how much horror is packed in this concept? Are we talking a satanic problem like the classic ROSEMARY’S BABY or THE OMEN or demonic like a flesh & blood CHILD’s PLAY? Or, are we just talking ‘horror’ figuratively? I guess we will wait for that clarity.

THE BABY is from screenwriter Siân Robins-Grace (Kaos, Sex Education). The HBO and Sky co-production is co-created by Robins-Grace and Lucy Gaymer (Production Manager for Gangs of London, Liar) and produced by SISTER and Proverbial Pictures. “With THE BABY, we want to explore the powerful anxiety around the question of whether or not to have children,” said Siân Robins-Grace and Lucy Gaymer. “The ambivalence of not knowing, the bafflement at everyone else’s certainty and the suspicion that the whole thing is one millennia-long scam. We’re thrilled to be working with such a phenomenal team of producers to help us bring this weird baby into the world with HBO and Sky.” THE BABY is by turns dark, comedic, and horrifying,” commented Cameron Roach, Director of Drama, Sky Studios. “The vision that Siân and Lucy are bringing to life is truly unique.” “We are so inspired by the horrific and hilarious vision that Siân and Lucy have for THE BABY and fell in love with Siân’s script the moment we read it. Natasha and the baby are two rare beings who we can’t wait to bring to life,” noted the SISTER Team.

So, get ready for the newborn, what…demon-child?

Vampires returning to HBO in THIRST

Ooo, sink your fangs into this one. TRUE BLOOD’s Bill Compton and Eric Northman have made way for a new brood of vampires as THIRST comes in development. Macro Television Studios has put into motion a hip-hop drama that tells the story of a brilliant but cocky Atlanta rapper who thinks he’s found his way to stardom when he links up with hip-hop’s hottest group. But he has no idea they are hiding a terrifying secret: they are a 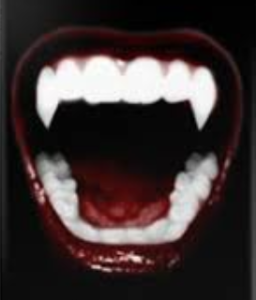 family of vampires with roots going back centuries.

The work comes from the writing team of Leah Benavides Rodriguez (The Arrangement, Empire) and her husband, Carlito Rodriguez (a producer of Empire, Hip Hop Vs. America; writer for THE LEFTOVERS). The duo will also serve as executive producers and showrunners. The series is based on an original concept by Kevin Jordan, who will executive produce under his first-look deal with Macro. “Music has been integral to both our lives, and ‘Thirst’ is the perfect opportunity to blend genres, while exploring the intersection of fame, culture and what it means to be American,” Benavides Rodriguez and Rodriguez said in a joint statement. “We’re excited to bring it to life with Macro Television Studios and the rest of our dope team, and thrilled it has found its home at HBO.”

Okay, this falls under the ‘& More’ category. Backyard Wrestling, not horrific, just odd.  The concept is called TRE CNT, which stands for – Tre Count, which I know warrants still further clarification. The work centers around working-class family, neighbors, and friends in Houston’s Third Ward (The Tre) who come together – pooling their talents, resources, savvy, and dreams – to build a unique hip-hop centric backyard-wrestling empire from nothing. They all orbit around Cassius Jones (20s), a dock worker and struggling pro-wrestler, who uses inherited life-insurance money for start-up cash, and the deed to a shotgun house from his grandfather to start his American dream. 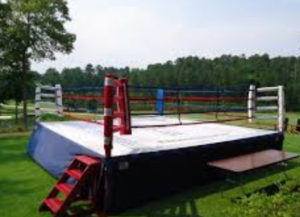 What also makes this odd is some of the team behind this project. Dwayne Johnson (BALLERS) and Issa Rae (INSECURE) and their respective producing companies are backing the deal. Who would have thought these two would partner up? The show is written and created by Mohamad El Masri (HERE AND NOW). El Masri executive produces with Johnson, Dany Garcia and Hiram Garcia for Seven Bucks Productions, Rae and Montrel McKay for Issa Rae Productions and Dave Becky, Tom Lassally, Jonathan Berry for 3 Arts Entertainment. Judah Miller (producer on CRASHING, VICE PRINCIPALS) executive produces and serves as showrunner.
(Source: Deadline) 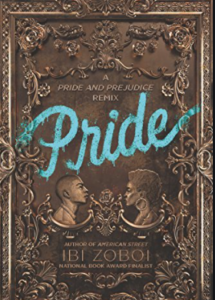 INSECURE star Nastasha Rothwell and Aziza Barnes (Snowfall, Teenage Bounty Hunters) have teamed to develop a series based on the Ibi Zoboi novel “Pride” at HBO.

It is described as a Haitian-Dominican coming of age story explores young love, teenage angst, and gentrification through magical realism fated by the gods of Santeria with an Austenian twist. Rothwell and Barnes both worked on the story for the project, while Barnes will be the writer. Both will serve as executive producers. Leslie Morgenstein and Gina Girolamo of Alloy Entertainment will also executive produce. Alloy Entertainment will produce in association with Warner Bros. Television.

Rothwell has been a series regular, writer, and producer on HBO’s INSECURE since its first season. She also previously wrote for Saturday Night Live during the 2014-2015 season. Barnes is a celebrated playwright whose work has been produced at prestigious theater companies like Steppenwolf Theater, Woolly Mammoth Theater, and MCC Theater. She has participated with residencies such as Sundance, Ojai Playwrights Conference, and Center Theater Group Playwriting Workshop.

That wraps up this Slate. We will keep our eyes out for these projects and more. Of course, as long as pandemic protocols are in place, these projects are subject to delay or termination.