So, we are snooping around to find news about upcoming programming that, of course, has been delayed by the pandemic but still moving forward. One such concept has been the horror-comedy, helmed by Nicole Kassell, entitled THE BABY. It has been casting up the series and below we list some of the players that have come into the project.

THE BABY is a funny, raw examination of motherhood as an institution: a set of unspoken and often horrifying rules that affect women differently depending on how they’re viewed by society. Michelle De Swarte (pictured above) stars as 38-year-old Natasha, the friend who’s never made long-term plans. So when she unexpectedly finds herself with a baby, her life of doing what she wants, when she wants, dramatically implodes. Controlling, manipulative and with violent powers, the Baby twists Natasha’s life into a horror show. And as she discovers the true extent of its deadly nature, Natasha makes increasingly desperate attempts to get rid of the baby. But while she doesn’t want a baby, the baby wants her.

Who’s starring in it?

In addition to De Swarte, Amber Grappy (pictured at right) is Bobbi, Natasha’s younger sister, who couldn’t be more different from her. When Bobbi sees her sister with the thing she wants most in the world – a baby – she is blinded by jealousy and unable to see the danger they are all in. Amira Ghazalia (pictured at left) will play Mrs. Eaves, the 73-year-old enigma who has spent the last 50 years 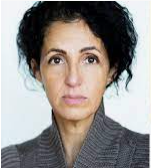 living out of her car. She seems to be everywhere the Baby is. But who is she, and what does she want with Natasha’s new arrival?

Who’s behind the scenes?

The powers that be have made some obligatory statements about the production that is in front of cameras now in the UK.

Siân Robins-Grace(pictured lower right) and Lucy Gaymer said: “With THE BABY we want to explore the powerful anxiety around the question of whether or not to have children. The ambivalence of not knowing, the bafflement at everyone else’s certainty and the suspicion that the whole thing is one millennia-long scam. 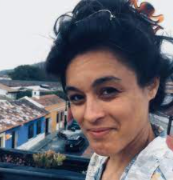 We’re thrilled to be working with such a phenomenal team of producers to help us bring this weird baby into the world with HBO and Sky.”

Amy Gravitt, EVP, HBO Programming said: “Siân and Lucy’s exploration of motherhood is as funny and resonant as it is twisted, The Baby gives voice to all the women who just don’t know. We’re thrilled to be partnering again with Jane Featherstone, Carolyn Strauss, and our friends at Sky.”

Cameron Roach, Director of Drama, Sky Studios commented: “THE BABY is by turns dark, comedic, and horrifying. The vision that Siân and Lucy are bringing to life is truly unique.”

SISTER Team said: “We are so inspired by the horrific and hilarious vision that Siân and Lucy have for THE BABY and fell in love with Siân’s script the moment we read it. Natasha and the baby are two rare beings who we can’t wait to bring to life.”

Season One will contain eight half-hour episodes in 2022. We await the arrival of THE BABY.