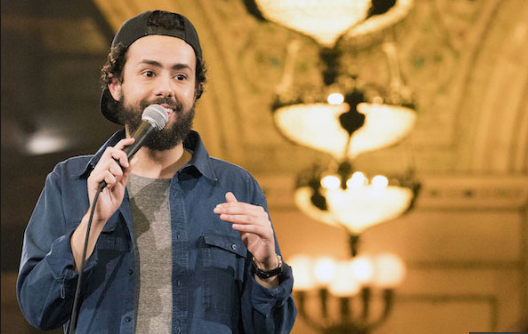 Okay, I have to admit I don’t know the guy. Who is Ramy Youssef? Oh, Ok, he has his own show on HULU. Who knew? He also had a stint on USA’s MR. ROBOT. So, he can act but is he standup funny? Evidently, HBO thinks so to give him this comedy special. HBO has always kept an eye on the fresh standup talent out there. That fact is especially true today as there are no big comedy stars doing big comedy concert specials nowadays; you know like Pryor, Carlin and Williams used to do? Anyway, I am game to see what Youssef has to offer. Make me laugh, Ramy!

I have put some thoughts together before watching the special that makes sense to me. Ramy Youssef was born in Queens, New York City to Egyptian parents. He is of Arabic lineage. And with Americans suffering from a phobia of people of that descent, he is out to prove, via his standup, that Arabs have the same feelings as other human beings. Thus, the name of this special. That is a solid enough angle, now let’s see if I’m right.

AND I WASN’T!  Though his Muslim background is referenced he doesn’t dwell on it nor does he talk about the Arab world and how we should all get along because we share humanistic similarities. What Ramy’s special is instead is just a casual let’s-just-jump-into-my-routine kind of thing. He comes off so casual that you can easily see that it is so unrefined. He is all over in his ramble, but the observations he makes are quite unique to unravel.

Ramy Youssef gives is thoughts on Jussie Smollett, the FINDING NEVERLAND revelations and Donald Trump. But there were about five minutes in there while he was talking about sex that he lost me. His flow of thought was pretty bad. When he clicked, however, was in the last 15 minutes of his set. The clip I opted for above is from that segment. I was off on my theory about the direction his routine was going to take but when his moments on Arabic culture & his faith surfaced, they proved the best part of his set up to the very end.

In other words, his routine is a work in progress but his root concepts are thought-provoking. And like Ramy stated a few times in his piece those are just my feelings; I have no control of them they just are what they are. RAMY YOUSSEF: FEELINGS is playing now across HBO’s platforms.