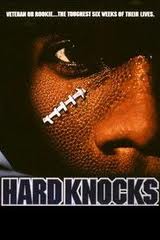 I just had to get out a blurb out about the latest news regarding the HBO sports program HARD KNOCKS. As you know it is a series that gives a full access behind-the scenes look at an NFL football team as it goes through Training Camp in preparation for a season of gridiron action. It often focuses on rookies and their adaptation to the pro squad as a way into the locker room and practice field. But, the show also looks at off the field personal issues and team rivalries and how that affects the team.

The show has been billed as one of the fastest turnaround reality series in television history as the show chronicles the team chosen gearing up for play and starts airing as that same season begins. It also then, makes it a demanding task for a squad to undertake as the production crew is invasive, hectic and always present during the good days and bad. Some dirty laundry can and does make it to screen. And that depiction of the players and the team as a whole can have negative effects on the franchise.

As an example of my point, imagine the following scenario. HARD KNOCKS did not film and air in 2011 due to NFL labor negotiations, but let’s suppose it had and the team featured was the New Orleans Saints. Think of the implications and backlash if the intent of the “bounty hunters” on that team had been caught on camera. Clearly such an incident wouldn’t have happened intentionally, but it still could have been implied or exposed via the series. No team wants negative press or the invasion of privacy so most teams decline the offer to participate.

In six seasons of the show six different teams have agreed to the scrutiny. The premiere season in 2001 featured the Baltimore Ravens; the team was looking to repeat its Super Bowl win. The following season in 2002 focused on the Dallas Cowboys which offered a look at Emmitt Smith’s final season. The show didn’t make another appearance until the Kansas City Chiefs were examined in 2007. That year featured a battle for the starting quarterback position. The Dallas Cowboys got a repeat performance in 2008 which showed new players all vying for a roster spot. In 2009 the Cincinnati Bengals got their turn and that season’s ratings were higher than any other previous season and won a Sports Emmy. The last season to air was 2010 with the New York Jets. We skip a year and that takes us to 2012. 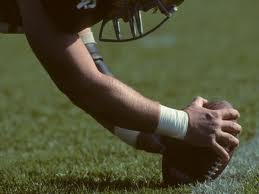 As of this writing HARD KNOCKS has yet to sign a team. According to its timeline HBO needs to procure one by the end of May. That gives the production crew time to work out logistics and be ready to hit the field when Training Camp begins. The New York Jets had been offered a repeat performance probably aided by their signing of Tim Tebow to the franchise. They declined. The series was then pitched to the Atlanta Falcons, the Denver Broncos and the San Francisco 49’ers and they all said NO! Just recently the Huston Texans were given the opportunity and they cited the same reasons as everyone else when they declined the offer. The team did not want the invasion of privacy and the media attention; they just wanted to concentrate on practice and playing ball.

Recently, two teams have spoken up without being asked to be the featured team. The Washington Redskins saved HBO the bother by declaring through their head coach Mike Shanahan that “they just wouldn’t feel comfortable in that atmosphere.” But, the Jacksonville Jaguars have volunteered to be the team to watch in HARD KNOCKS this year. HBO is not jumping at the chance to sign them up however or they might have done so by now. I guess they are holding out until the 11th hour before they sign up the Jaguars. I’m not that knowledgeable about the team but it doesn’t seem to have any breakout star players or a large fan base within the ranks of NFL teams out there. Maybe, as HBO gets down to the wire they might just skip the season as opposed to featuring the Jacksonville squad. We will have to see how this all plays out in the next few weeks.

HBO Watch will let you know what happens! But, while we are waiting the final decision is your NFL dream team worthy to be on HARD KNOCKS?