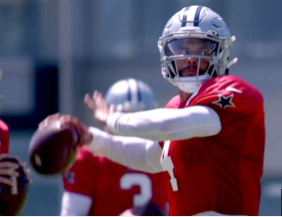 COVID-19 is the gift that keeps on giving.  This week of Hard Knocks kicks off with a COVID scare that temporarily shuts down practices and in-person meetings.  There are five possible cases, which include fan-favorite wide receiver CC Lamb.  The outcome is that all COVID tests are negative.  America’s Team may have avoided the virus, but 12 players will not avoid the roster chopping block.  This is a bad week to have an off day.

Dak Prescott is finally cleared by the Cowboys medical staff to throw in practice, but as soon as one player gets close to 100% another has a setback.  Second-year running back Rico Dowdle suffers a fractured hip and is out indefinitely. JaQuan Hardy is the “next man up; the coaching staff is frank with the permanent spot hopeful:  Dowdle’s injury has taken less pressure off Hardy for securing a spot, but now the pressure is on for him to fill the second most important offensive position.

The entire roster and coaching staff are being broken down by the Texas heat, even Mexican native Isaac Alarcón. Alarcon is named the team captain for the Jaguars game, but this honor does not guarantee a permanent spot on the roster.

To break the tension, we are treated to snips of a stand-up comedy routine at a local club. The performer is Tarrel Basham, a defensive end who just signed a two- 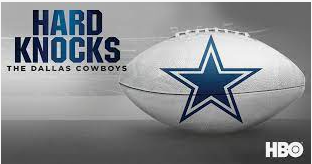 year deal. Basham has already accomplished one of his life’s dreams and he entertains strangers and teammates by pursuing the second dream.

Gameday.  Tommee Profitt’s modern take of the iconic hype song Eye of the Tiger plays just before the Cowboys engage the Jaguars in gridiron action. Despite DiNucci firing the pigskin down the field well, Hardy running his heart out, and Alarcon performing well, it is another loss for America’s Team. The team has all the components to have a winning season, but their ‘mojo’ is still missing. Will a healthy Prescott get the offense into a proper cadence? The defense appears to be sound, never letting a game run amok. The Cowboys have had great teams even with a winless preseason. And any casual football fan knows that the preseason is not a direct correlation to the regular season’s outcome. But for 12 players, their future in Dallas has predicted off their preseason performance. Yet, the Cowboys are 0-4 in the preseason and 6-10 for the previous year, which is not an encouraging preamble to the regular season.

This season of Hard Knocks has had the least drama of the series in recent memory.  There are no players holding out for money, no legal issues, and no apparent internal relationship problems. Yet, the charismatic Dallas team and HBO/NFL Film’s production keep this sports series fresh and relevant.