You remember us mentioning Dunk and Egg, right? Do you know the post from way back in 2012? Well, we told you then it could be a viable series for HBO down the line and well, almost a decade later, it seems it will be so.

Now we have heard buzz over the years that HBO was considering returning to the milieu. The first time around HOUSE OF THE DRAGON got the honors to go 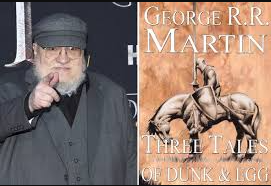 to series. Well, the talk has been bubbling over yet again that multiple sequels would happen. Hey, after all, all production houses in this day and age have got to ride their cash cow, right? Disney does it by doing live-action adaptations of their golden animated treasures and now WarnerMedia is out to do it with its moneymakers. Yeah, why do you think a relaunch of SEX AND THE CITY and a movie prequel to THE SOPRANOS exist?

Though there has not been an official declaration yet TALES OF DUNK & EGG has been put into fast-track development for the outlet. The adventures of Dunk (Ser Duncan the Tall) and Egg (the future king Aegon V. Taregaryen) has a strong likelihood of coming to fruition because this talk over the years has not died down, so something within the rank & file of HBO is in favor of finding a companion piece to join HOUSE OF THE DRAGON. Either that or AT&T is breathing down their necks like an enraged Drogon insisting that the only thing to excite the masses is to become the GAME OF THRONES channel.

Okay, we may find fans eager for some tales from the GoT universe but be careful that you don’t glut the market with the stuff. HBO is not about just pounding out sequels for the name of a brand or at least it wasn’t back in the day. So, though it has been asked time and time again, are you ready for more GoT-themed programming because it is most likely we are going to be inundated with it. There are other viable stories to tell, if done right so are you game? We will keep you posted.