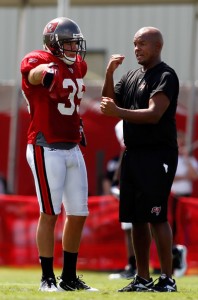 As one of the teams rumored to be in talks for HBO’s popular series ‘Hard Knocks’, the Tampa Bay Buccaneers looked to be one of the front runners for the show’s next season.  Hopefully you weren’t holding your breath because it appears that the deal has fallen through.  Here is a statement released by the team today:

“Some of you may have heard that we were approached by the league about the possibility of being this year’s team on ‘Hard Knocks.’ After discussing the idea and carefully considering the opportunity, we have respectfully declined. It was certainly an honor to be considered, and we think it is a good indication of the excitement and national interest that is forming around our team. This year, however, we believe it is in the best interests of the team to keep the focus on the field and what we hope to accomplish in 2011. As we told the league, we would be honored to be considered again in the future; it is always an entertaining and informative show and we look forward to watching whomever takes our spot this year.”

The show could have arguably increased the teams visibility on the national stage but it looks like HBO’s Emmy award winning series will need to find another team to document this season… assuming the NFL has a 2011 season at all.  HBOWatch will be keeping tabs on the series and will let you know as soon as we do which team will opt to take the spotlight on Hard Knocks.

Which team would you like to see on the HBO silver screen?