The group is off gallivanting and playing paintball, and for now, it seems Fraser (Jack Dylan Grazer) has been begrudgingly accepted into the group. He still gets targeted by Danny (Spence Moore II) and Sam (Benjamin L. Taylor II) but he just deals with it to be around Caitlin (Jordan Kristine Seamón). She is the one to win the day, snatching the flag from Craig (Corey Knight) who clearly lets her win. It’s the sweet, older brother type move. He cares about her and is feeling sentimental given he’s shipping off in a matter of hours. His girlfriend Valentina (Beatrice Barichella) agrees to marry him and everyone pools what cash they have to get everything arranged.  That’s friendship right there. 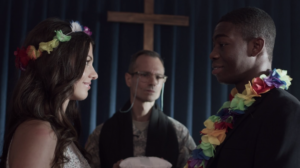 After gathering funds and proceedings with the nuptials, the whole group heads out of town to someone’s fancy house. Here’s where I’m fuzzy, not really sure who owns this place. Some kind of Russian guy? In any case, they clearly break-in to party and I’m not thrilled about that. Kids being irresponsible kids, I guess, but definitely not something I would have done as a youth. It’s a very nice house so I can at least see the appeal. They go buck wild, letting loose in all kinds of ways. I chuckled when Fraser was the only one to not jump in the pool because it felt so perfect for his character. Danny even drinks, which is well established at this point to not be his style but anything for Craig. Sam makes his feelings towards Fraser known again, but Fraser doesn’t let that keep him from helping Sam sober up. I am so conflicted about my feelings towards Fraser! On the one hand, he’s so completely supportive of Caitlin and this identity process she’s going through. Plus, he helps Sam get the booze out of his system. But he’s also physically, verbally, and emotionally abusive towards his mother Sarah (Chloë Sevigny) and their dynamic seems toxic. He fairs slightly better with Maggie (Alice Braga) but not by much. I just don’t know how to feel about him.

Back at the party, Britney (Francesca Scorsese) has her moment in the spotlight playing the piano and singing. It was utterly beautiful but also such a desperate bid for attention. I feel like she needs people’s eyes on her, especially making eye contact with Cait while she’s making out with Sam. Eventually, everyone tuckers out and in the wee hours of the morning, Craig slips away to return to base and deploy. I’m worried about Craig.  He’s clearly the glue holding the group together. He keeps Danny in check and looks after Cait. He was cordial to Fraser and keeps an eye on his younger brother, Sam. What will happen to the group when he’s gone? And what will happen if we lose him?

Everyone is struggling with something in this episode. Cait gets up early to go shooting with Sarah and has quite a talent for it. Fraser is less than thrilled that they’re spending time together and Richard is losing even more of his daughter. Though there is someone else in his house he should be more worried about…  his wife Jenny (Faith Alabi). She shows some apartments to new recruits, along with Maggie. I’m wondering how long they’ve been hooking up because they seem pretty familiar with each other by now. I definitely don’t condone cheating, but hearing her talk about Nigeria and her past made me glad that she at least had someone to talk to. She admits that Danny isn’t Richard’s biological son and this is probably an additional wedge in that relationship, especially as Danny pursues the Islamic faith and questions his own identity.

“You are your hair.  It’s what people love about you.” 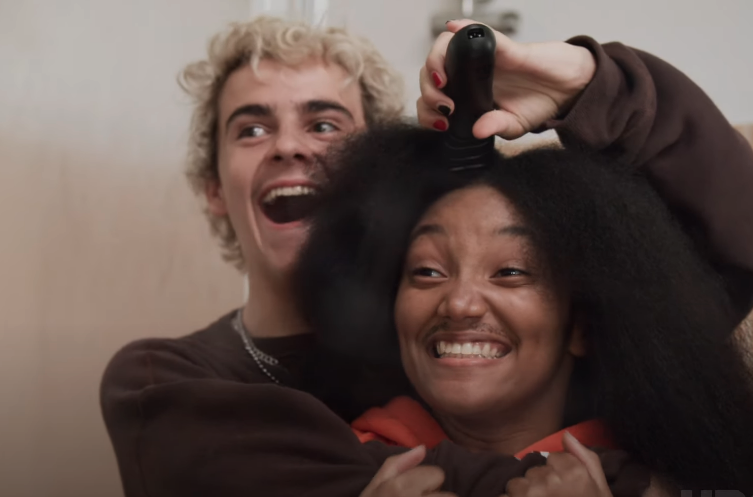 This episode is a turning point for Caitlin as she works to figure out who she wants to be.  A note at school indicates that Giulia (Nicole Celpan) is looking for Harper and Cait is interested. She sees that Danny has moved on and is now dating Britney. I thought the wind here was excellent, showing in the subtle way how her hair is holding her back from being her true self. Her entire experience in the bathroom, down to her telling Fraser, “I’ll be grateful for the rest of my life,” was breathtaking cinematography and direction by Guadagnino. As she goes to experience life as Harper, Fraser heads off to see a movie and ends up spending the evening with Jonathan (Tom Mercier). His night certainly fairs better than Cait’s, which ends up a tad disappointing to her. When she returns home, she meets an irate Richard who found her discarded hair. Everything for him is fracturing; losing control of his base, his daughter, and his world to this new family next door. How much more can Richard take before he snaps? And how much of her new identity will Cait sacrifice to keep the peace?

Time will tell as we continue to watch We Are Who We Are, Monday nights at 10:00pm on HBO.