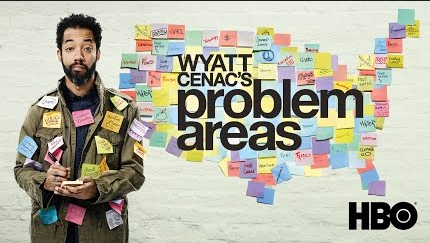 We have an official press release in hand that announces Wyant Cenac’s return for another season of his docuseries. WYATT CENAC’s PROBLEM AREAS Debuts April 05, 2019 in late night. Here is that release –

This season focuses on education in America, investigating teacher pay, student mental health, the school-to-prison pipeline and other pressing topics. Cenac will visit West Virginia, Oregon, California, Minnesota and other areas around the country to learn how communities navigate issues facing public education.

Okay, so that tease played up the comedic side oy Wyatt but there is some serious discussion ahead just as there was in Season One when he took on policing practices & concerns. Though he does go for some serious conversations to get behind the primary topic he lightens it up whenever he cans or needs to do so. The release concludes with –

While education today serves as the season’s primary focus, WYATT CENAC’S PROBLEM AREAS will address other issues, including the unionization of fast-food workers and the potential dangers of facial recognition software, as well as comedic solutions to lighter topics, such as how to get more steps in at the office or how to teach kids practical skills, like filing taxes.

Get ready for some Wyatt!