HBOWatch is testing out a new writer and this is his third and final test post.  He is filling a gap in our reporting here by looking at  HBO CHAMPIONSHIP BOXING. So give due attention to the words of Connor Buhagiar.

The Krusher is back.

Kovalev, displaying the same ferocious straight-armed punching power that once catapulted him to the top of the light-heavyweight division, dissected southpaw Igor Mikhalkin from the opening bell. Officially it was a TKO at 2:24 of Round 7, but the pattern was set back in the first round: herky-jerky movement (and failure to win the southpaw-orthodox positioning war) from Mikhalkin, followed by the perfunctory one- and two-punch combinations before darting back out. Mikhalkin, to his credit, knew his man from their days together on the Russian amateur boxing team, and whenever possible he avoided the blistering counter right hand. Which, unfortunately for the challenger, was not nearly frequent enough. From the second minute of Round 1, Kovalev was able to pierce Mikhalkin’s high guard with his (quite literally) murderous right cross. 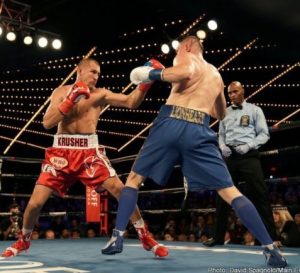 They say that lefties who don’t jab don’t win, and that old chestnut was vindicated from at least Round 2 onward. Mikhalkin would make some good moves – the orthodox wisdom for a southpaw being to circle to his right, to nullify his opponent’s power hand and set up his own right hook – only to mincingly circle left, throwing a timid lead left hand to deter the chase.

Kovalev saw right through it. The champion utilized the 1-2 ad infinitum, teeing off with impunity. So little respect did Mikhalkin win for himself that Kovalev felt free to experiment, occasionally throwing hooks with one foot in the air, even venturing a thirty-second span from the southpaw stance himself (a maneuver which, at least against Andre Ward, cost him dearly). Boxing is done with the feet, and while by that metric Sergey Kovalev will never be a masterful boxer, he is the most effective – the most menacing – when he stalks his opponent, walking him down behind a bazooka jab and the looming threat of a right hand that could spell instant doom. Tonight he was seemingly getting his practice swings in – the old hunter’s instinct was finally back.

Bottom line: this is indeed the Krusher of old. But this Krusher 2.0 enjoys the same narrative-beefing advantages as Krusher 1.0 – namely, mid-level opposition without the footwork or defense to nullify his thunderous punching power; which does not possess the boxing IQ or the intestinal fortitude to cut off the ring or mix it up to the body and drain his questionable gas tank, as Andre Ward did to such success; which respects his one-punch knockout ability far too much to ever take the risks necessary to give Kovalev a run for his money.

Dmitry Bivol could be just the shot in the arm Kovalev needs. The last time he faced such high-level opposition, he came apart at the seams.

Fighting a contender as strong as Sullivan Barrera (21-1, 14 KOs) was a huge step up for young prospect Dmitry Bivol (12-0, 10 KOs). The Russian proved more than up to the task. In a curious twist, Barrera turned down the opportunity to fight Sergey Kovalev, claiming the purse was insufficient. Over the ensuing twelve rounds of his bout with Bivol, he might well have come to regret that decision. 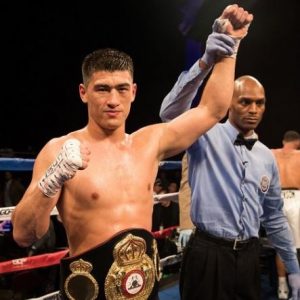 The question entering the fight was if Bivol would knock Barrera out in the first round, or stretch the action over several. The answer was a pleasant marriage of the two. Bivol’s claim to fame in his young career has been his vaunted knockout power, but the fight showcased a more mature skill set. Throughout, Bivol employed a fierce, piston-like jab, landing 97 of 400. His feet brought him openings, as he darted in and out before and after throwing punches, goading Barrera into clumsy counters. The biggest moments came in the fourth and sixth, off of two truly nasty hooks that wobbled Barrera’s knees. The Cuban threw enough to keep the fight honest, but it was one punch to two or a woozy one-two against a darting four-punch combination punctuated by an exclamatory hook. It was a thoroughgoing beatdown that nonetheless seemed about to go the distance.

The fight game is as much dazzling entertainment as much as it is exacting craft. The two could not have come together better for Bivol than they did late in the twelfth round when he landed a stunning right-hand flush on Barrera’s chin to close out the show. Barrera beat the count, but he was woozy enough that the ref waved him off. The knockout was almost perfunctory: Bivol had already outboxed Barrera for the entire fight, with the judges awarding the challenger only one round, the tenth. The young Russian outlanded Barrera 243-75 according to Compubox stats, or 31% to 12%.

Fight fans would have been happy to see Bivol win a lopsided decision. Instead, by virtue of him winning ten of eleven rounds and then proceeding to knock his opponent out, they can get excited. He’s not just a good boxer, he’s got it. If the skin around Bivol’s eyes can hold up to the leather (or another errant headbutt), we could have a new superstar on our hands.

What’s next for the light-heavyweight division? Kovalev’s fight was very clearly yet another tiresome tune-up fight against yet another journeyman, ending in a similar fashion to his November 25th bout against Vyachselav Shabranskyy. Bivol’s, meanwhile, was the utter domination of a perpetual contender: in many ways, the two fighters seem to be on opposite trajectories. Kovalev needs to step up in quality of opposition, while Bivol has finally earned the right to a big money fight. We may have to wait until the conclusion of the May 19 Adonis Stevenson (29-1, 24 KOs)-Badou Jack (22-1-2, 13 KOs) WBC championship bout to see any fireworks. And then, because this is boxing, there will be much saber-rattling prior to any significant match being made. (God help us if Andre Ward ends his brief retirement and returns to throw a Brobdingnagian monkey wrench into the mix.) But in boxing, the best should fight the best, and if these two countrymen were to lace up the gloves against each other to unify the WBO-WBA titles, not a fan in the house wouldn’t turn on his TV to watch.