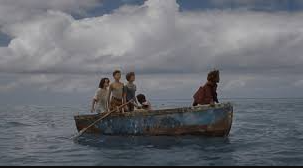 New theatrical releases are not a weekly promise on HBO’s schedule right now but SATURDAY, DECEMBER 19 does house one. Tune in to HBO at 8:00pm or check for the uploads to the streaming sites and you will find WENDY.

Who is this Wendy, you ask? It is Wendy Darling and if that name doesn’t mean anything then you didn’t read the right childhood book or see the right movie as this character has been in a few. The title character is the young girl who, along with her two brothers, were led on adventures with one named Peter Pan.

Yes, WENDY is a retelling of the tale of the Lost Boys and Neverland and the boy who never grew up or sported a shadow. This is a very stylized telling executed by the filmmaker of Beasts of the Southern Wild (now airing on HBO) Benh Zeitlin. The movie was shot on the island of Montserrat. Zeitlin described the film as ‘a friendship-love story-adventure of her and a joyous, reckless, pleasure-mongering young boy as they swirl in and out of youth and as the ecosystem around them spirals toward destruction.’ 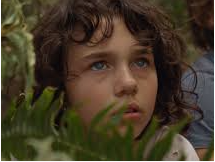 It features a passel of performers you’ve never heard of – Devin France (Wendy Darling), Yashua Mack (Peter Pan), Gage Naquin (Douglas Darling), Gavin Naquin (James Darling), Ahmad Cage, Krzysztof Meyn, and Romyri Ross. Oh, yes, and Captain James Hook is also present; played by Kevin Pugh. He, however, is not the villain of the piece, and in fact, based on the synopsis I’ve read, most of this telling does not play out at all like the story we’ve seen in other iterations.

That could be refreshing after so many adaptations of the Peter Pan story or it could be a flaw; that is where the critics weigh in. Does WENDY veer too far off from the story we know and expect? The Atlantic says, “The effort it must have taken to create this movie is apparent in every frame, but that doesn’t mean it is watchable.” Entertainment Weekly states, “There is something beautifully all-ages about the movie’s kaleidoscopic score and firefly glow, but by the ninth montage of cliffs and shore and joyful screaming down a hill, it all starts to feel a little like a film-school reel.” RT sums it up this way – 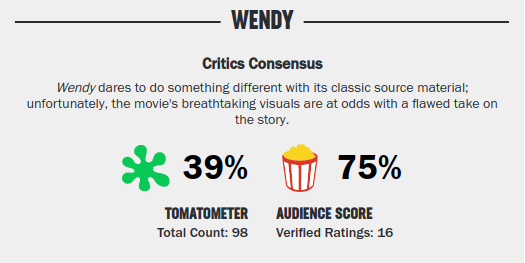 If it is anything like his first flick you can be sure Zeitlin will once again show the mastery of getting so much out of child actors. The trailer shows us a hint of it:

Again, find WENDY on HBO and across its streaming sites beginning December 19th.