HBOWatch Editors were not able to line-up a writer to review the return of the badass dreadlocked alien but that doesn’t mean that we don’t want to draw your attention to it. THE PREDATOR is a 2018 sci-fi action film directed by Shane Black and written by him along with Fred Dekker. It is the fourth installment in the Predator film series, following Predator (1987), Predator 2 (1990), and Predators (2010). So, just what goes down in this one? An alien ship is downed and U.S. Rangers are on it. The Predator aboard is captured and studied, but its tech-laden armor is mishandled and ends up in the hands of an autistic child. A second Predator, bigger & badder of course, is dispatched to claim back the technology, clean up the mess and hunt down as many nuisance humans as possible along the way.

To get the story told takes the onscreen efforts of Boyd Holbrook (HBO’s BEHIND THE CANDELABRA and THE O. G.), Trevante Rhodes (12 Strong & an episode of WESTWORLD), Jacob Tremblay (the upcoming Doctor Sleep & an episode of ANIMALS.), Keegan-Michael Key (Keanu, VEEP), Olivia Munn (THE NEWSROOM), Thomas Jane (The Expanse, HUNG), Alfie Allen (GAME OF THRONES) and Sterling K. Brown (This Is Us, INSECURE). Brian A. Prince is credited for playing the Predator itself.

But how good is it? The Hollywood Reporter called the film “bigger, meaner, gorier, funnier” (than previous installments but), ”Whether the world actually needs it and whether this reboot was necessary at all, is probably a question worth raising, but at least Black’s take on it is to never take it too seriously while keeping us duly entertained.” Our go-to aggregator denoted it with the following:

I saw the ones with Arnold Schwarzenegger onboard so how later films stack up I just can’t say but I did always think the alien concept was cool in this franchise. Check out THE PREDATOR when it debuts on HBO SATURDAY, MAY 4 at 8:05pm; it is right after a showing of Predators at 6:10pm. 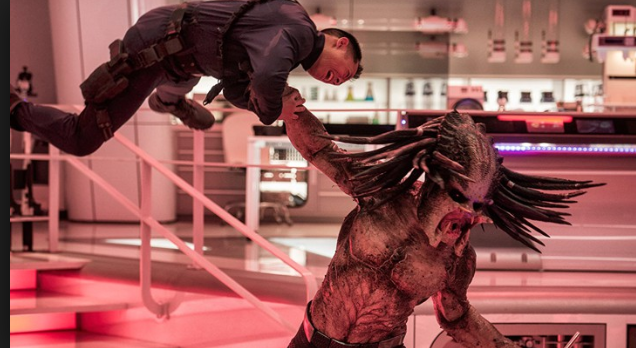