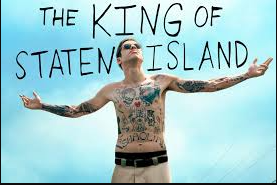 So here we go with another theatrical movie debut of a film I’ll admit I never heard of. And to top it off, it has a lead actor I’ve never heard of either. So, with that, regardless of the plot of the piece, can its lead, Pete Davidson, carry THE KING OF STATEN ISLAND. You tell me as the show debuts on HBO SATURDAY, JANUARY 09 at 8:00pm.

It is a comedy-drama film directed by Judd Apatow, from a screenplay by Apatow, Pete Davidson, and Dave Sirus. It stars Davidson, Marisa Tomei, Bill Burr, Bel Powley, Maude Apatow, and Steve Buscemi, and follows a young man who must get his life together after his mother starts dating a new man who, like his deceased father, is a firefighter. Filming took place around New York City in June and July of 2019. The movie has been called a “semi-biographical” take on the life of Davidson, who lost his firefighter father during the September 11 attacks and has had his own battles with mental illness. Here is a strong plot description from IMDb: Scott has been a case of arrested development ever since his firefighter father died when he was seven. He’s now reached his mid-20s having achieved little, chasing a dream of becoming a tattoo artist that seems far out of reach. As his ambitious younger sister heads off to college, Scott is still living with his exhausted ER nurse mother and spends his days smoking weed, hanging with the guys – Oscar, Igor and Richie – and secretly hooking up with his childhood friend Kelsey. But when his mother starts dating a loudmouth firefighter named Ray, it sets off a chain of events that will force Scott to grapple with his grief and take his first tentative steps toward moving forward in life.

It turns out that critics did like Davidson’s performance and it turns out he has been acting since 2013 and is even a cast member of SNL. I guess that shows you how much I pay attention to that iconic NBC show anymore, doesn’t it? The Observer (UK) says, “All loose limbs and exposed emotional scar tissue, Davidson is persuasively raw in a performance that becomes increasingly textured and interesting.” The Independent (UK) adds, “Scott is both adorable and unpleasant, his trajectory believably scattershot… with his marvelously sloppy face and soft aimlessness, he’s a pleasure to spend a couple of hours with.” But CNN states, “The movie drags on for 137 minutes, which feels like considerably more than the familiar premise and its aimless central character can fully support.”

So, I guess it all hinges on your like of Apatow slacker movies or Davidson’s persona on whether you watch THE KING OF STATEN ISLAND. Totally your call but, let us know in the comments below if you do watch it.