We know animation is huge, just look at the Mouse Empire, but to get anyone to review one is very difficult to do. HBO’s movie this Labor Day weekend happens to be a family animation picture from 20th Century Fox and we need to give it a bit of attention. Sure, why not? So ger ready for SPIES IN DISGUISE.

It seems that Super spy Lance Sterling (Will Smith) and scientist Walter Beckett (Tom Holland) are almost exact opposites. Lance is smooth, suave and debonair. Walter is…not. But when events take an unexpected turn, this unlikely duo is forced to team up for the ultimate mission that will require an almost impossible disguise – transforming Lance into the brave, fierce, majestic…pigeon. Walter and Lance suddenly have to work as a team, or the whole world is in peril.

I know, it sounds silly, but it could be fun. Maybe the trailer can convince you? 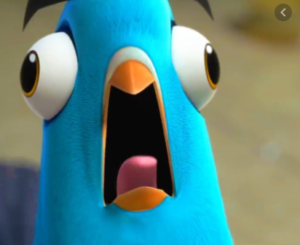 and Masi Oka. Mendelsohn voices the villain of the piece. He is Killian, a powerful technology-based terrorist mastermind with a left bionic arm that controls an array of weaponized drones that threatens the world. Killian is Sterling’s arch-enemy and his main mission objective. So, our agent disguises as a pigeon to take out the drones? Oh, boy!.

Hey, the gimmick must work as Rotten Tomatoes compiled a pretty good rating –

So, what am I saying here? An animated picture other than a Disney epic could be a good movie night too. Find SPIES IN DISGUiSE on the HBO channels, HBO and HBO Max and laugh at the pigeons!