HBOWatch Editors were not able to line-up a writer to review the Dwayne Johnson led SKYSCRAPER, but that doesn’t mean that we don’t want to draw your attention to it. After all, since Johnson is in the HBO stable with BALLERS it seems likely that HBO would gain first TV rights to most of his movies. How does this tussle in the tower tale stand up to other movies in his resume?  Didn’t we already see this played out in Die Hard and The Towering Inferno before this? You tell us.

Rawson Marshall Thurber (Central Intelligence, DodgeBall: A True Underdog Story) serves as director & writer of this piece for a cast including Johnson, Neve Campbell, Chin Han, Roland Møller, Noah Taylor, Byron Mann, Pablo Schreiber and Hannah Quinlivan. It takes us to Hong Kong but was filmed in Vancouver, British Columbia, Canada for Universal Pictures. In the movie U.S. Marine war veteran and former FBI Hostage Rescue Team leader Will Sawyer (Dwayne Johnson) now works as a private security consultant. His left leg has been amputated as a result of a suicide explosion on a previous mission. On a 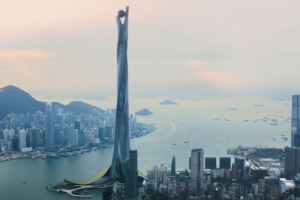 recommendation from his friend and former colleague Ben Gillespie (Pablo Schreiber), he is hired to review security for “The Pearl”, a newly constructed 225-story skyscraper in Hong Kong, for financier Zhao Long Ji (Chin Han). During his assessment, his family – wife, Sarah (Neve Campbell), and twin children, Georgia (McKenna Roberts) and Henry (Noah Cottrell) – are residing on the not-yet-opened residential floors. But lo and behold, the tallest, safest building in the world is suddenly ablaze, and Sawyer has been framed for it. The villain of the day is Kores Botha (Roland Møller) and the task is to whip his ass while saving the family. Can Sawyer do it in time? What do you think?

Ty Burr of the Boston Globe warns, “As a streaming option on a slow night or a long flight, the movie has its uses. But you’ve seen almost all of this before, with more wit and a better villain.” But Joe Morgenstern of the Wall Street Journal said: “The movie is great, outlandish fun because the star makes it so; he’s a soft soul in an action-hard body.” So, do you mind if it is derivative? Does The Rock keep you engaged?

Take in the action when SKYSCRAPER debuts Saturday, March 02 @ 8:00pm to see how the rescue gets pulled off.