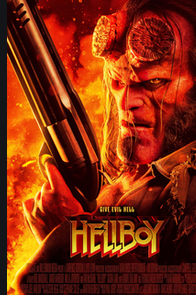 The Editors could not line up a writer to review the return of the Dark Horse Comic character but that does not mean we don’t want to draw your attention to it. Franky, I would have thought that this movie would have been right for any one of our writers, but I guess it was either bad timing or not that good a movie. The first go-around with Ron Perman was good enough for me, why this one exactly and why over the Holidays? Anyway, here it is.

It was directed by Neil Marshall, starring David Harbour in the title role, alongside Milla Jovovich, Ian McShane (DEADWOOD), Sasha Lane, Daniel Dae Kim, and Thomas Haden Church (DIVORCE). It is a reboot of the Hellboy film series and the third live-action film in that franchise. It seems that the writer & director of the first two movies, Guillermo del Toro, was not offered the gig; thus Ron Perlman, who had portrayed Hellboy in the previous films, refused to return. So, we got a whole new reworking.

Okay, so now what? Well, I don’t know if I can even wrap my mind around the plot of this one. I read it twice and just shook my head. Maybe, it is time for a trailer to help us.

I’m not the only one befuddled, but I’m just basing that on a synopsis and a trailer. Here are the words from two critics who saw the film in its entirety. Owen Gleiberman of Variety wrote, “It’s lunging to be a badass hard-R epic, but it’s basically a pile of origin-story gobbledygook, frenetic and undercooked, full of limb-hacking, eye-gouging monster battles as well as an atmosphere of apocalyptic grunge that signifies next to nothing. And John Defore of The Hollywood Reporter stated that “It’s just lousy. Bloated, vastly less funny than it aims to be and misguided in key design choices.” But it is also been touted, in this case by The Wrap’s William Bibbiani as “a horrifyingly good time. Neil Marshall’s Hellboy is a wellspring of creativity, a major superhero movie made for hardcore R-rated horror fans, overflowing with humor and action and scares.”

So, if you are an R-rated horror fan, and there are many out there than this take on Hellboy might be for you. For the rest of you, I’m sure you are taking in a seasonal Hallmark movie instead.