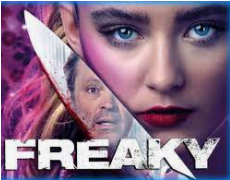 A new premiere arrives on SATURDAY, JULY 24 (8:15-10:00pm) and to know what it is about all I have to say is “Freaky Friday with a wicked twist.” Okay, be patient, I’ll give you more than that. But, as soon as I stated the older movie title what comes to everyone’s mind is the concept of a mother and her teen child swapping bodies and the consequences thereof. It doesn’t matter if you are thinking of Barbara Harris doing the switch with Jodie Foster in the 1976 version or the one from 2003 with Jamie Lee Curtis and Lindsay Lohan. The movies were done with hilarity in mind by Walt Disney Pictures. The concept went on to get two adaptations for TV in 1995 and 2018, but I digress.

Blumhouse Productions took the same concept to give us 2020’s FREAKY, but the big twist in the tale is that the body swap happens between a teen girl and a male serial killer. It is played in the comedic-horror vein for Universal Pictures and stars Katherine Newton (HBO’s BIG LITTLE LIES) as the high schooler and Vince Vaughn (TRUE DETECTIVE) as the Blissfield Butcher. It seems they do the old switcheroo because of a cursed dagger that is his weapon of choice. Oh, and it seems they have 24 hours to switch back before it becomes a permanent condition.

So imagine, for most of the movie, our teenager Mille in the body of Vaughn. Does that mean Mr. V. is playing a scared youth perhaps trying to dodge a manhunt for the killer in Blissfield? And Newton plays out the evil slasher. Does the butcher kill again in her body? Alongside the tone and pace of the movie, the trailer below will offer hints of what happens.

Well, it looks like a freakin’ wild stompin’ romp, doesn’t it? And critics liked it enough: The Atlantic says “Freaky knows it’s a farce and winks at the silliest of slasher tropes, but that satirical edge doesn’t keep it from being one of the most purely enjoyable horror works I’ve seen in a long time.” RT’s score is below. So, what do you say? Ready for some FREAKY fun? Note, it airs on the channel beginning at 8:15pm ET and, of course, you can watch it anytime on the site as of the 24th. 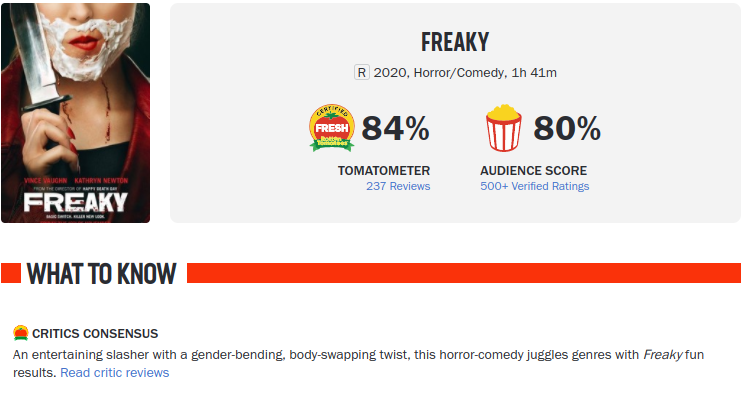