HBOWatch Editors were not able to line-up a writer to review DEMOLITION with Jake Gyllenhaal, but that doesn’t mean we don’t want to draw your attention to this R-rated comedy-drama playing on HBO. The 100-minute film  from Fox Searchlight debuts SATURDAY, JANUARY 07 at 10:00pm. It will then appear across the channels as well as on HBONow/Go. Below is HBO’s quick promo:

That doesn’t really give us much, does it? It is a relationship drama that centers on Jake’s character Davis Mitchell. Very simply, Davis is a successful investment banker at a firm founded and run by his father-in-law Phil. His wife, Julia, is driving them when they are T-boned by another vehicle, killing Julia. Recovering in the hospital, he attempts to purchase some candy from a vending machine which malfunctions. Davis drafts a complaint to the vending machine manufacturer that includes some venting of his personal experiences. This leads 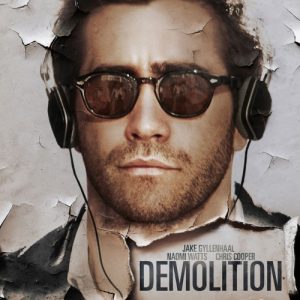 to a series of anonymous conversations with a customer service representative, Karen Moreno, in which they end up sharing details of each other’s life burdens. As a result of this Davis starts to rebuild, beginning with the demolition of the life he once knew. Thus, it ties into the title.

Making it all gel into what you hope is a heart-felt story along Gyllenhaal’s struggling Davis is Helen Lind as Julia. After all, you can’t grasp his loss until you are familiar with just what is taken away. Lind can also be seen in Turn: Washington Spies and had a recurring role in BOARDWALK EMPIRE. Joining in are Chris Cooper (HBO’s BREAST MEN and MY HOUSE IN UMBRIA) and Polly Draper (The Good Wife) as Phil and Margo, Julie’s bereaving parents and Naomi Watts (the upcoming Gypsy) as Karen, the only one really listening to Dylan. Perhaps the official trailer will help you find the emotional rhythm of the film better than the promo:

DEMOLITION comes from Jean-Marc Vallée of HBO’s BIG LITTLE LIES and the forthcoming SHARP OBJECTS and was written by Bryan Sipe. It was shot in and around New York City. Can you get caught up in the emotional story of Dylan Mitchell? Does Karen Moreno help him? Does she do the right thing and give him a free package of Peanut M&M’s? Watch it and see and let us know. We end with a Rotten Tomato rating: