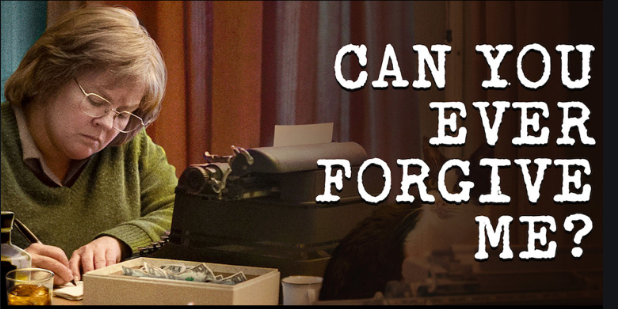 The Editors could not line up a writer to review this movie but that does not mean we don’t want to draw your attention to it. To be truthful, I’ve never even heard of it, but then I’m not a fan of Melissa McCarthy. CAN YOU EVER FORGIVE ME? came out in October of 2018 and is based on the confessional memoir of a lady named Lee Israel. The New York Times called Lee Israel’s book: “CAN YOU EVER FORGIVE ME?: MEMOIRS OF A LITERARY FORGER” a “sordid and pretty damned fabulous book.”

McCarthy personifies our little Miss Forger and shows just how she got into the particular criminal predicament of the 107-minute movie.  In 1991, following the critical and commercial failure of her biography of Estée Lauder, author Lee Israel struggles with financial troubles, writer’s block and alcoholism. With her agent unable to secure her an advance for a new book, Israel is forced to sell her possessions to cover expenses, selling a personal letter she received from Katharine 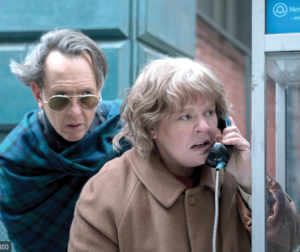 While conducting research for a potential Fanny Brice biography, Israel discovers two letters written by Brice, one of which she takes and shows to Anna. Anna gives a low offer due to the letter’s bland content, prompting Israel to return home, add a postscript to the second letter, and bring it back to Anna, who takes the letter for $350. Israel then starts forging and selling further letters by deceased celebrities, incorporating intimate details in an attempt to command higher prices. Also appearing along the way are characters by Jane Curtin, Anna Deavere Smith and Ben Falcone. The movie’s director was not McCarthy’s husband Falcone, but Marielle Heller of 2015’s The Diary of A Teenage Girl.

The movie is not just about Lee Israel’s criminal actions but her personal ones as well, as she bonds with then has a falling out with Grant’s Hock character with his own story to tell. Both Grant & McCarthy received honor and acclaim for their roles including Oscar nominations. The writing, by Nicole Holofcener and Jeff Whitty also got accolades for Best Adapted Screenplay.

In conclusion, our go-to aggregator posted this rating:

CAN YOU EVER FORGIVE ME? Debuts Saturday, August 31 at 8:00pm on HBO and across its platforms.