James McAvoy and Daniel Radcliffe play the scientific duo that attempts to bring a dead man to life in Victor Frankenstein. The road to hell is paved with good intentions and in this movie we see a man who is possessed with wanting to extend the boundaries of scientific exploration and the creation of life after death. We all know that when you’re playing around with experiments, unchartered territory and the possibility of resurrection, things don’t always end on a positive note. 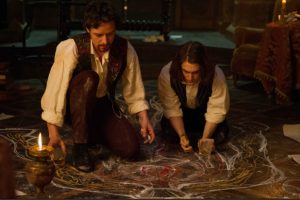 The two protagonists couldn’t be more different: Victor appears to come from an affluent family and is a medical student studying medicine at the London College of Physicians. Unfortunately for Victor, he is obsessed with taking his scientific experiments to the next level: by next level, I mean using a variety of dead body parts, dead animals, etc. in order to try and resurrect them. Igor plays a ‘hunchback’ at the London Circus, poor fellow. Now, he’s not a true ‘hunchback’ but because he’s deformed, he fits the freak role at the circus perfectly. When he isn’t being humiliated in public at circus events, he harbors feelings for one of the acrobat ladies, Lorelei, and likes to record medical pictures, anecdotal records and sketches of the human body. In fact, he looks to be quite good at those medical recordings and sketches.

Victor and Igor are brought together by an accident at the circus – which involves Lorelei – and Victor realizes that there’s more to Igor than meets the eye. Igor is taken in and soon, comes to understand that Victor is a medical student who is bound by a single purpose – to unlock the mystery of reanimation. Kind of creepy and kind of sinister and yet Igor becomes Victor’s scientific partner. Of course, Victor also has issues with his family (who doesn’t?) and he’s also having trouble at school (when you miss so many days, one tends to get expelled). Victor’s manic enthusiasm sets the tone of intensity – he believes he’s on the verge of great scientific breakthroughs, yet his methods are cloak and dagger and he appears to run on little sleep and frantic energy. Even the background imagery of darkness, thunder and lightning give the film an added sinister edge. You get the sense that Victor is not a happy, fulfilled man.

No matter – Victor charges onwards and with the help of a wealthy but obnoxious classmate named Finnegan, he is given the means to continue his morbid scientific experiments. Let’s see – rotting or decaying materials and body parts; a very rural and decrepit castle for experiments and a relentless police inspector by the name of Turpin, trying to bring Victor down – all these ingredients add up 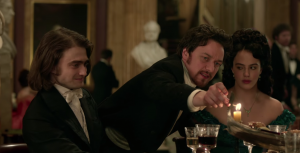 to a recipe for disaster, chaos and fear. Igor and Lorelei become romantically involved and Finnegan has his own ulterior motives for supplying Victor with the means to continue. Victor resents Lorelei for being with Igor because you know women are a huge distraction. Now, once we lay eyes on the creature: a totally misshapen thing, stitched together with my different parts, grotesque in size and pallor – we see the desperation of why Victor wanted to create such a thing. Victor had a brother, Henry, who died. Victor’s father, Mr. Frankenstein, was an imposing and domineering man who laid Henry’s death at Victor’s feet – hence, the guilt and burden of trying to create something dead and bring it back to life would somehow, someway redeem Victor in his father’s eyes. How very wrong he was. The creature is gross to look at and well, you kind of feel sorry for it – it doesn’t truly belong to the realm of the dead, nor should it be amongst the living. Thinking back to other film versions of Frankenstein, I’m of the mindset that this one is lackluster. It’s not scary, yet more a study of human behavior and the desperation of one man to explore the uncharted scientific territory. In comparison to the Frankenstein movie that stars Robert Di Niro, Kenneth Brannagh and Helena Bonham Carter, this one is a bit on the dull side. 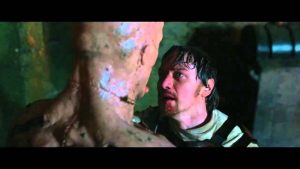 The creature is not long for this world and every single thing that could go wrong once the creature is alive, goes awry. The ending is left vague. Igor and Lorelei choose one path and Victor goes down another. You have to think back a hundred and twenty-five, hundred and fifty years ago – so many of the scientific experiments were performed in a sense, for the greater good, because who stood to benefit from them? Humanity. If it weren’t for the brave (and perhaps afflicted) men and women who pushed the envelope a little further, who knows what our society would have evolved into? Then again, some say that trying to experiment with the dead and attempting to bring them back to life is not a good idea. You don’t know what the consequences would be, done the road. Even though we’ve evolved as a species, is Man truly meant to play God?

That question is once again yours to explore when Victor Frankenstein debuts SATURDAY, April 29 at 6:00pm.