At first I wasn’t sure what to make of this political yet mathematic thriller, but eventually, I got a little bit into it. With the great cast and decent concept, it makes a fairly interesting watch. Ben Affleck plays the main character, Christian Wolff, who is an accountant for drug cartels and criminals around the world. When he’s not kicking it criminal, he’s hanging out in his Airstream trailer with an original Renoir and Jackson Pollack. For work above board, he does normal accounting for normal people. But he’s the main target for the US Federal Treasury Department agent Ray King, played by J.K. Simmons (of OZ fame) who forever remains one of my favorite actors. With his retirement looming, King wants to get this ‘Accountant’ and take down his empire. Or does he? He brings in a new agent, played by Cynthia Addai-Robinson, to become his protege in taking down the mystery man.

When Wolff takes a normal job doing bookwork for a large robotics company, he notices abnormalities while working with Dana Cummings, played by Anna Kendrick. When the CEO is suddenly found having committed suicide, Wolff knows there is more to the story and that it is likely life threatening. Wolff and Cummings have to go on the run until Wolff can track down who is behind it all and take them out for good.

So admittedly, I was not 100% sold on this movie. And in fact, around halfway in, I almost gave up. But much like other movies, this one is a slow burn. You have to stay with it, and I’m glad I did because the action picked up not too long after my suggestion to my boyfriend that we stop watching. The cast is remarkable, which is why I was surprised that I was bored at all. Affleck does intensity well and gets his own chance at being Will Hunting, math genius. Anna Kendrick is one of my favorite female actors and though I prefer her in comedy, she can do serious as well. Added bonus, and spoiler, there is no romantic element being forced into the film. For which I was incredibly grateful because I absolutely cannot stand when romances are forced into films where they don’t need to be. J.K. Simmons, as previously mentioned, is one of my all-time favorite actors. There hasn’t been a part played by him that I wasn’t intrigued by. Jon Bernthal makes an appearance in the film as a rival ass kicker of some kind, and for most of the film, you’re left wondering how he fits in. Well, you do finally understand, and I did totally see that plot twist coming but none the less his acting is enjoyable.  In fact, I would argue that he had some of the best lines of the film and best emotional interaction with those lines. A slew of other big names appears in smaller parts to round out the cast. 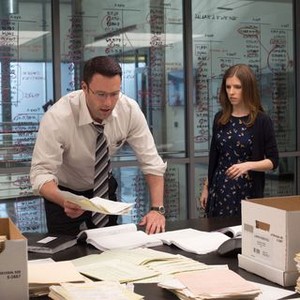 One issue I had with the film was the aspect of autism. Wow, that kind of made me sound like I hate people with autism.  What I mean to say is that Affleck’s character is depicted as having Asperger’s, a higher-functioning form of autism. And I’m torn between whether the movie meant to be a champion for those with autism or just use it as a plot device. There is some sympathy made for those living with disabilities, but at the same time feels like it is just being used to portray how weird and difficult Wolff is to deal with in everyday life. Which does not set well with me, especially having an autistic brother of my own. Particularly when regarding Wolff’s family when he’s growing up, we see his mother try and get him help only to be stymied by her husband. Being frustrated and unsupported, she leaves. Wolff’s father believes in more of a tough love approach which basically turns Wolff into the sociopathic person he is and why he does accountant work for drug cartels. In any case, the movie to me did not quite handle autism the way I think it could have. But with the cast and pretty decent plot twists, I would say it is an action movie you might want to check out. Maybe someone else who has experience with autism in their life could chime in: did you feel it was handled well or just used as a plot device?

Find The Accountant debuting on HBO Saturday, June 10 at 8:00pm.