A movie for all!

We’ve all heard the old tale, Storks deliver babies…THE END! But did you ever ask yourself, why did they stop delivering babies? Well, wonder no more! Here’s what happened…
You see, a stork named Jasper decided he wanted to keep a baby instead of delivering it. At that time, the boss, Hunter (voiced by Kelsey Grammer), decided there was no longer a future in delivering babies. You see the risk was far too great! In the midst of chaos, the baby’s address was lost and Jasper (voiced by Danny Trejo) flew away. Without any address or idea of what to do next, the

y decided to keep the baby, Tulip, and switch to the delivery of e-commerce products and that’s where we come in. They are, in short, the modern day Amazon. The writers instantly draw a parallel to the idea that we want our products instantly (even babies), and now those products come instant via Stork (or drones for us). Content like this can draw in the adult in the room as it’s a bit more challenging for a child to process. We are able to see the humor in how impatient we’ve grown and how our demands for accessibility have increased.
Back to the story…
On Earth, we are introduced to the Gardner’s, a family of three, mom (Sarah, voiced by Jennifer Aniston), dad (Henry, voiced by Ty Burrell) and a son (Nate, voiced by Anton Starkman). The parents are distracted by their real estate business leaving their son Nate to ask the age old question: “I decided I want a baby brother…let’s make this easy, where do you get one?” The dynamics of this family mimic the ambitious family we see every day. They find time for work and leave their child to their own imagination. This leads to a moment of reflection for the adults in the room and you can almost hear the writer posing the questio 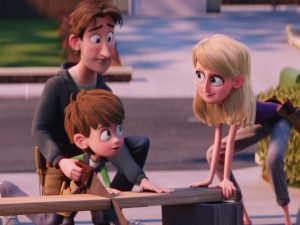 n—how many times do we prioritize work over our family? You hear this question as the parents promise to make time for their son, only to cut to them saying their real estate motto: “we never stop, that’s the Gardner’s promise, not even for 5 minutes.” And because they don’t stop, their son feels lonely, unfulfilled and sad. In true only child fashion, he goes on a mission to find out where he comes from. He finds the Stork delivery service and submits a request for a baby brother who has ninja skills (I’m sure we’re all happy it’s not that easy). But, the problem is, he doesn’t know that they aren’t in the business of delivering babies anymore and that’s where it gets fun!

We go in between the family on Earth whose son longs to have a companion in the form of a brother and Junior (voiced by Andy Samberg), & Tulip (voiced by Katie Crown), the newly assigned stork to the problem and the baby they decided to keep, who is now grown and un-socialized (well at least not with humans). And the journey to bring young Nate his little sibling is off and running! The writers do a great job going in between content that will keep the youngster in the room laughing, engaged and glued to the TV while the adults in the room will remain intrigued and in tune to the adult-friendly moments along the way.

Storks is a relatively short movie, which is good considering its target audience. The plot is very easy to follow and everything makes sense. Birds and their constant battle with glass makes its way into the movie as one of the biggest challenges Junior faces is getting through a glass factory without running into every glass along the way. The theme of identity and loneliness, which let’s face it, we face all through our life, appears in a way that gives us all hope. The dialog is charming, and there’s a healthy balance of conflict, humor, fear, excitement, urgency and most importantly, resolution. And yes, the family does get a baby sister in the end, who has ninja skills like Nate requested, so he’s okay with her being a girl after all. Tulip gets to meet her family in

In closing, there’s a healthy balance of content appealing to whoever sits in front of the TV. I enjoyed Storks because it does a great job celebrating the importance of family. Whether you are Tulip, an orphan kid raised by Storks, the little kid (Nate) who thinks a new baby brother will bring more unity and excitement in his life, or a pack of wolves (voiced byKeeegan-Michael Key & Jordan Peele)  who want a little kid of their own, there’s a story line you’ll be attached to at some point in the movie. I would recommend this for anyone who loves a good animated movie. If you are like me and find yourself watching an animated movie every year or so, this is a pretty good film to knock off your list!

Gather the family for Storks debuting Saturday, May 27 at 8:00pm on HBO.