When it was announced that M. Knight Shyamalan had a new movie coming out, you could understand why I would be skeptical and a tad worried. He hasn’t at times had the best reputation for good films. It took seeing the trailer for me to be convinced it would be worth my time.  And how my, it was well worth my time, but take a look and see for yourself.

I gotta say, that trailer completely gives me the hee-bee-jee-bees.  If James McAvoy is not on the radar for an Oscar, then the whole Oscar system needs to be reevaluated. McAvoy stars as Kevin, a man with 23 distinct personalities all percolating inside his brain space, and a 24th threatening to emerge. Two of the personalities have conspired to kidnap three girls, to provide them as a sacrifice for the emerging “Beast.” The girls will do anything to get out alive, even trying to enlist the help of Kevin’s own personalities. Time is ticking down until the “Beast” will arrive, can the girls get out alive? Or are they destined to die?

Oh man, this movie. I am disappointed I had to watch it alone, but the film is not, in my opinion, the typical jump scare horror film. While there are occasional moments employing that horror film standard, this to me is far more a thriller building constant intensity with occasional jumps and a sci-fi twist. Shyamalan uses amazing filmography to build suspense. The girls sitting captive in a room with an open door builds beautiful suspense because while they want to escape, they don’t know what is waiting outside the door for them. And that’s the classic M. Knight we have previously enjoyed. His use of sounds and images 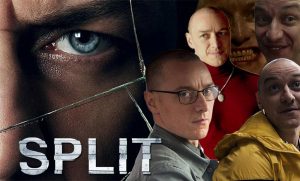 pulls together amazingly to make you feel trapped with the girls and wondering what will await you.

McAvoy has proven before what an outstanding actor he is.  If you are unfamiliar with his work, I highly suggest Atonement or The Last King of Scotland.  McAvoy has proven himself quite capable of taking on a variety of genres. But this film really proved the extent of his acting abilities. While we don’t see every single personality of the 24, we see several and eventually even in rapid succession.  His ability to seamlessly weave himself between characters is scary yet mesmerizing. You just cannot imagine what is coming next but you know you want to be there to watch McAvoy perform it. Stunning.

The supporting cast is quite good as well.  Anya Taylor-Joy plays Casey, the outsider invited to spend time with the popular girls in art class. Haley Lu Richardson plays Claire and Jessica Sula plays Marcia, the popular girls who don’t get Casey but are forced to deal with her. But Casey seems to have an edge in dealing with Kevin, and as the story unfolds we come to understand why. These girls capture the emotions of being trapped and panicked quite well. In the role of Kevin’s therapist is Betty Buckley, and her ability to see through Kevin’s identities and know right away which person she was talking to was brilliant. But her study of dealing with multiple identities is what gives this story its non-standard horror twist. Some medical studies have shown that those dealing with Dissociative Identity Disorder can have physiological changes between identities, such as the emergence of diabetes or loss/gaining of sight. So with the emergence of the “Beast,” what more could change?

Horror films weren’t something I was into for a very long time. But after seeing Cabin in the Woods, I started coming around more to the idea of being scared or held in suspense.  After giving this a try, I can say without a doubt, though my repertoire is small, this is one of the best horror films I have ever seen. I encourage any horror or thriller enthusiast to check Split out.